Home/Information/This Week on the Farm 6/23

If this is your first week picking up your box, please check out the Week 1 newsletter to find information about tote return, plastics, and other policy info that will make your CSA experience run more smoothly. Copies of our newsletters can be found on our “Shares” page.

In last week’s newsletter I wrote about how we hadn’t had any rain in about two and a half weeks. We made up for that in a hurry last week as we accumulated over five inches in a two day period. This rainfall event tested our new swales, and although they performed as designed, we are going to have to make adjustments. When we installed the swales we had hoped that they would retain enough water that a five to seven inch rain event would not cause the swales to release water at the relief points. However, the rain we had last week was large enough over a short enough time frame that the water did escape at the designed relief points. So, it is back to the drawing board.

Our friend (and CSA member Drew) is helping us out on this project. He is going to do some additional calculations to see if the swales need to be deeper/wider/longer/ or a combination of all three to withstand a large rain event. It isn’t that uncommon for us to have a five to seven inch rain event over the course of a few days, so we want to make sure the swales can capture that amount of water. On the positive side, we were able to walk in the fields today, something that we were not able to do last year after a similar rain event.  So the swales are helping, they just haven’t totally solved the problem. 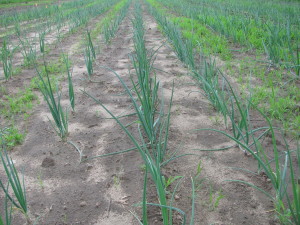 With all of the rain this past week we have been limited to hand weeding and mowing the roads as far as field work is concerned. Tyler’s father, Don, has been busy mowing the roads and fallow fields. It is amazing how quickly the farm looks back under control once he mows. We have a very nice 3 pt mower that we purchased two years ago and it works really well. As far as hand weeding we have been spending the majority of the time working in the onion field to get that under control. We only have a few more rows to go and we will be done weeding in the bulb onions. Once the soil dries out enough we can cultivate with the tractor and we will probably get by for the rest of the season without having to do more weeding in that field.

Oftentimes when our members come out to visit we get asked why we do not grow anything in black plastic. We are in the very small minority of farms that do not use black plastic as a weed suppressant. Although black plastic may save a lot of time by not having to weed as often, we just do not like the idea of using plastic that is costly, difficult to completely remove from the field without leaving debris, and non-recyclable. There are farms that use acres and acres of black plastic and that idea never appealed to us. We would rather deal with the weeds and spend time weeding than grow using plastic.

Two years ago we had an outbreak of cutworms that knocked out our cabbage and cauliflower stands. This year we had another outbreak of them and the damage is widespread. Two years ago the cutworms were limited to one field. This year we have found them in every single field under cultivation. They are the nastiest pest that we deal with because they only come out at night to feed. Small transplants are especially susceptible since cutworms eat by wrapping their bodies around the tender stem and taking two to three bits out of the stem right at the soil line. This is enough damage that the plants cannot recover. They are like mini loggers that can cut down a field seemingly overnight. When plants are larger and more established they will feed on the leaves, which while stressful on the plants, is not fatal.

This year we have seen damage in the following crops: lettuce, basil, parsley, tomatoes, peppers, eggplant, kohlrabi, kale, cabbages, cucumbers, melons, winter squash, and summer squash. Although some pockets have been decimated (mainly the cucumbers), most plantings have been able to withstand the damage and keep growing.

So, with all of this damage and stress on our plants, you may be wondering what we as farmers can do about it. The short answer is not much. Even conventional farmers with an arsenal of chemicals at their disposal are hard pressed to get decent control over cutworms when there is a large outbreak. The main weapons that we are able to utilize are placing barriers, planting ridiculous amounts of plants so that enough survive, and releasing parasitoid wasps that lay their eggs in the cutworm eggs. 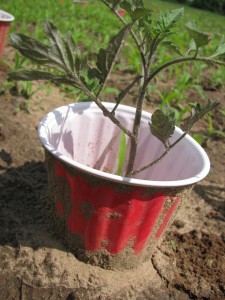 We noticed the outbreak early enough that right after we transplanted our tomato plants we went out and placed red solo cups around each plant. The cup acts as a little fortress around the plant, preventing the cutworm from gaining access to the plant. This is very time consuming since each plant needs a cup, but well worth it for higher value, longer season crops like tomatoes.

In the kohlrabi and cabbages, we did nothing to try to prevent this generation from doing damage. We had planted enough plants that we have enough for our CSA members and will be making successional plantings for the rest of the season. In the cucumbers, we have more plants in the greenhouse that we will be planting either later today or on Wednesday. Since we do not have very many plants left over, each of these will be getting a red solo cup barrier to prevent more losses. 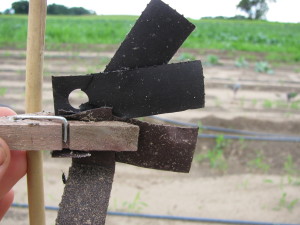 Our main method of control are the beneficial wasps that we release once a week. These wasps not only help control cutworms, but they also help control imported cabbage moths as well. The wasps find cutworm/imported cabbage moth egg masses and deposit their eggs inside. As the wasp eggs hatch they use the original eggs as a food source, thus preventing those eggs from hatching and starting a new generation of problem pests. Just one more way that nature is awesome!