Home/Information/3/16 – This Week On The Farm

It’s been warm enough the last few days for us to get a lot of things done outside… finally! Spring can’t be too far off because we have crocuses in full bloom! It’s always such a nice thing to see those beautiful yellow flowers pop up when everything else is still brown.

In the greenhouse we have installed shade cloth for two purposes, one is to shade the plants later in the spring to keep them from burning up in the heat, and the other is to add another layer of protection at night so that we don’t lose as much heat.

On March 3 we seeded some Dianthus and some carnations, as well as parsley. The Dianthus and carnations are all up and the parsley is just starting to peek through. Today we’ll be seeding some of our early cabbage crops such as broccoli, cauliflower, collards and cabbage. Brussels sprouts also will be seeded today because they need a very long growing season, so we hope to have some of those later this summer.

We still have shares available, so get those sign-up forms in! 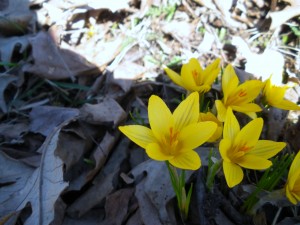 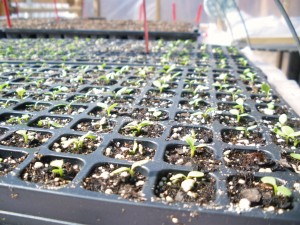 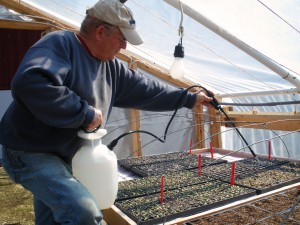