Home/Information/This Week on the Farm 10/23

Well, when it rains it pours. The ground has been so wet since last week that we were not able to dig the potatoes. We are going to have to wait until the soil dries out enough that we can get the tractor in the field before we can harvest the last of the potatoes.

Next year we will have the storage facilities to be able to harvest all of the potatoes at once earlier in the season. This will allow us to be able to grade the potatoes and have an accurate count of how many potatoes that we produced. We can then calculate how many weeks of potatoes we have and divide them accordingly. This is only our third year in business, so we are still in the process of building our infrastructure without the use of government aid or bank loans. It takes time to build a business/farm from scratch.

Looking back on this season I am excited that we were able to provide on average eight items in the boxes throughout the season. The last four to six boxes have better reflected what we wanted to provide you with the entire season. I am very proud of the fact that we did not have to skip a week or buy produce from other farms. What we grew was given to our members.

There were some items that went out this year that we wish could have been given in larger quantities. We gave what we had available, but sometimes it just didn’t seem to be enough. The greens, especially collards, needed to be given in larger quantities because they cook down so much. We are keeping that in mind as we plan for next year. To be honest, after this year, we are planning for another drought. We just were not satisfied with how the weather impacted the food we were able to give you.

From a growing perspective we got hammered by the weather, by insects, by disease, and even by bad seed lots. It was quite a year. Even before the drought was in full swing we got hit by a 40+mph wind storm that covered all of our direct seeded plantings. Only about a third of the plantings were able to push through the layer of soil that was blown over them.

Then we had an outbreak of cutworms that totally destroyed our broccoli and cauliflower plantings and partially destroyed our cabbage crop. As far as disease, as mentioned above, we had an outbreak of bacterial spot that meant we had to destroy our tomato seedlings. We had several crops, like Swiss chard, kale, and golden beets, that did not germinate. We will be trying a different seed source next year for those crops.

We would like to thank you again for all of your support, especially given how difficult this season turned out to be! We can’t thank you enough for all of the positive feedback about how much you loved your produce! As a thank you for all of your support, for the 2013 season, returning members will be able to signup at 2012 prices if you sign up by March 15, 2013. Shares go on sale January 1st. Happy Holidays and we hope to see you next year!! 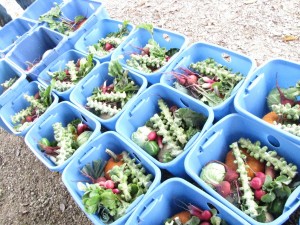 We would like to thank everyone who filled out a survey for this season, especially those who gave constructive comments! We really do take your input seriously and we wanted to share with you some noticeable trends.

Small produce– Many people commented on the small onions and potatoes and wished that they had been larger. Both of these crops put on size during the middle of the summer. This was right when we were in the midst of the most severe drought since 1988 and the most widespread drought since 1956. Without water plants cannot produce enough energy to grow, let alone put into storage organs like tubers (potatoes) or bulbs (onions).

We are planning on adding more drip irrigation next season and hopefully that will mitigate some of the water issues if we are unlucky enough to have another severe drought next year.

More garlic– Another trend from the surveys was that people wanted more/larger garlic in the boxes. We are in the process of building up our seed garlic supply. 15 bulbs of organic seed garlic costs anywhere from $80-$100. We needed to plant at least 300 bulbs of garlic for our members to get multiple bulbs of garlic next year. So instead of buying seed garlic every year and passing the costs onto you as the members, we are trying to increase our garlic supply by growing our own garlic and selecting the seed each year. This meant that all of the large bulbs got saved for seed and the smaller heads went to you in your boxes this season. We are hoping that in the next year or two we will have built up our supply enough that we can start putting larger bulbs in the boxes more often throughout the season.

Where were the tomatoes?!?!!!!!– Almost everyone commented on the lack of tomatoes this season (as they should). Our first planting of tomatoes showed signs of a bacterial spot infection. Since we do not spray any chemicals, we had to destroy the crop. Other farms may have gone ahead and planted diseased plants, but we have to take the longer view of things. We cannot introduce a disease that can live in the soil for multiple years since we do not spray any chemicals to try and fight the disease.

We planted another round of tomatoes, but they were just too late in maturing. Our plans to try and prevent this from happening again include:

Planting the seeds in smaller cell trays. This way the roots fill up the cell and can be transplanted at an earlier date.

Planting two separate batches of tomatoes that are planted two weeks apart. Each batch will be in a different greenhouse to prevent the spread of the disease in case it does appear.

Adjusting the planting date a week later for the first planting so that the plants are not in the greenhouse where moisture is high and air flow is low for a long period of time.

Believe us when we say that we are very serious about having an excellent tomato crop next season. Nothing is more frustrating and disheartening that having a total crop failure on a very common crop!