Home/Information/This Week on the Farm 10/25

Well, we have reached week twenty and our final delivery. The season goes by so quickly! Overall the season has gone well. There were some crops that didn’t germinate (carrots and parsnips) and others that didn’t produce (broccoli and red cabbage), but for the most part things produced well. 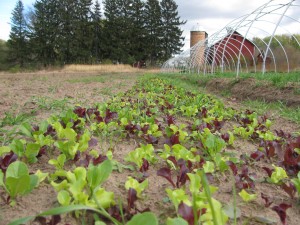 Next year we will hopefully have better luck with our lettuce. I know a lot of you were hoping to see more lettuce in your box this year instead of some of the other greens. We just had horrible luck with germination for our mid- and late-summer plantings. Our fall planting germinated really well, but has grown so slowly we still do not have enough to put in the boxes. Maybe by Thanksgiving…

Tyler also transplanted raspberry plants from his mom’s garden out into the field yesterday. A major reason for the move was that it will be easier for us to harvest  everything in one location.

About three years ago she started with five plants. One of the plants died and the others grew a lot and sent out new plants. When he counted how many plants he transplanted he discovered that there were eighty plants produced from the original four. We more than doubled our raspberry patch with this new addition. We also now have three different varieties of raspberries. It makes me hungry just thinking about it.

For those of you who get cauliflower this week you should soak the cauliflower in a little salt water to remove any worms that might have hitched a ride. Then just rinse the salt water off before cooking or eating. This handy tip can be used for your Brussels sprouts as well.

A word about the Brussels sprouts. We are not overly thrilled with the way the sprouts turned out this year. They are really small compared to last year. We are going to try very hard to find last year’s variety from an organic seed source.

There is some insect damage on the outer portion of the sprouts, but if you peel the first couple of layers off they will be nice and tasty. We are going to try to come up with a better insect control method for next year’s sprouts this winter during our down time.

We would like to thank you for joining us for the 2011 growing season and we look forward to seeing you next year!