Home/Information/This Week on the Farm 10/6

It is officially fall, we had our first frost Sunday morning. We knew that temperatures were going to be close to freezing on Friday and Saturday night last week, so we spent most of Friday getting everything prepped and ready to go for frost protection. All of our irrigation was already in place in the tomatoes and peppers and we just had a few valves to turn to get that system ready to go. We did harvest some tomatoes and peppers that were ripe just to make sure that we would have some for this week in case actual temperatures were much lower than projected.
We covered all of our sensitive greens with row covers. We placed wire hoops every four feet and then covered them with our row covers. Each row cover is about fifteen feet wide and is designed to be laid out flat. To get extra protection we folded it in half to have a double blanket over all of our greens. Friday was extremely windy which can make laying out a 150 foot long piece of cloth very difficult, but the wind was in the perfect direction and it actually helped straighten out all of the covers so we could get them lined up correctly. As we laid the blanket over each hoop we laid a sand bag next to each hoop to keep it from blowing away. We did run out of sand bags so we ended up using rocks from our rock wall to act as weights. Most farmers pick rocks out of their fields, but apparently we put them back! 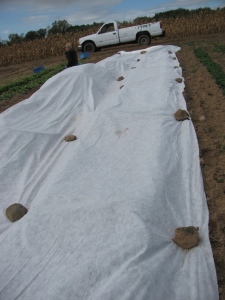 All in all we covered our mustard greens, looseleaf lettuce, head lettuce, arugula, and some radishes with the covers. The covers kept everything warm this past weekend, but if temperatures get super cold even the covers won’t be enough to keep everything alive. I am keeping my fingers crossed that we won’t have a killing frost for another week or two. That will give these crops time to keep growing and if we have to we can harvest them early for the last couple of boxes.
Thankfully Tyler did not need to fire up the irrigation system on Friday night as well as on Saturday night. We did get up frequently on Friday to check the temperatures, but it only got down to 36ºF. Saturday night/Sunday morning he was outside by 4am and had the irrigation running by 4:30am. It took until 8:30am for temperatures to move back up above freezing so that he could shut the system off. Even with a leak in our feeder hose he was still able to run all of the sprinklers for four hours without running out of water. We think that the feeder hose got hit by the loader forks on the tractor sometime in the last month, most likely when we were trying to clear some brush. It won’t be a problem for the rest of the season, but we will have to splice in a new piece of hose for next year.
When I went out to check on everything Sunday afternoon everything looked great. In a few places the row covers had been blown off, but nothing was damaged. It looks like we will be able to have one more week of tomatoes and peppers next week since we were able to protect everything from this first frost. We are planning on going through and gleaning everything that we can from both crops next week. It will be interesting to see how much we are able to get off of both of those crops since they are warm season crops and it will be mid-October!
Speaking of warm season crops, you have dill in your box this week. Our spring planting of dill didn’t germinate well because it was in super sandy ground. We wanted to experiment to see how well a late planting of dill would do. It survived the frost well and we will be able to take that into consideration next year when we start working on our planting schedule. I would like to be able to put dill in the boxes earlier in the season, so in addition to timing on our planting schedule we are going to take a closer look at where the direct seeded crops will be located.
Between last Wednesday, Saturday afternoon, and Monday we managed to finish getting the last of our winter squash harvested. We did not have nearly as much crop damage as we did last year, which was very nice to see. There were a few squash bugs out in the field, but no where near as heavy an infestation as last fall! We experimented with a couple methods of harvesting the squash to see what was easiest on our backs. The first couple of times we each had a tote that we dragged along behind us as we filled it with squash. This was okay since we had more people picking at one time, but it was hard on our backs and arms when we carried the full totes to the trailer.
The second method we tried worked much better. One person rode the four wheeler with a bucket in our front basket and drove alongside the squash pickers. Each squash picker then tossed the squash to the rider and they placed the squash in the front bucket. Once the bucket was full it was pulled out and placed in the trailer and a new bucket was placed in the basket. Remarkably, very few squashes were dropped and it gave us a second opportunity to check each squash over for bad spots. Plus we spent the day playing catch, which was fun.
Once the trailer was full we drove back to our big greenhouse and unloaded the buckets. Each bucket was then sorted into four categories, small, medium, large, and green (immature). By the time we had everything sorted it took up all of the bench space in our big greenhouse!
We also harvested the few pumpkins that ripened this season and they are currently in our garage to keep them protected from the cool night temperatures. We need to get our pumpkins in the ground earlier next year so that they have a full growing season to mature. We knew when we planted them that it was unlikely that there would be a fantastic yield since it was late and the plants were stressed, but it is still disappointing. Luckily there was one really nice big pumpkin for Devin’s first halloween pumpkin. I am looking forward to his reaction when he feels the goopy insides of the pumpkin.