Home/Information/This Week on the Farm 10/8

It is hard to believe that it is the second week in October and there still hasn’t been a frost. It hasn’t really even been close to freezing yet and the forecast for nightly lows doesn’t include any chances for the next week! I am not complaining though, it does give Tyler and I more sleep since we aren’t out running the sprinklers for frost protection.

We had a very wet weekend on the farm. Between all of the various weather systems that went through we had over two inches of rain. We were hoping to be able to get into the fields on Monday to use our new combine that Tyler picked up on Friday, but the beans need to dry out before we can harvest them. Hopefully the fields will dry out by this Friday and we will be able to harvest the black turtle beans. 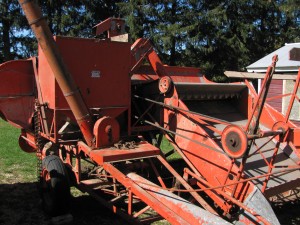 We did do a modified dry run on Sunday using the combine to check to see if it works. We hooked it up to the tractor and ran it in place to make sure all of the parts ran smoothly. There were only one or two minor adjustments that needed to be made (and liberal application of WD40 to stop the squealing) and then we tested it by tossing all of the Jacob’s Cattle bean plants that we had pulled by hand from the field into the combine.

The major lesson that we learned was that we waited too long to harvest the Jacob’s Cattle beans this year. Next year we need to harvest them earlier, as soon after they dry down as possible. This will reduce the number of moldy/rehydrated beans and will mean less waste and less time spent sorting through the beans after they are combined. In twenty minutes of running the combine we finished shelling two thirds of the total number of Jacob’s Cattle beans that were planted this year. That is compared to hours and hours of shelling by hand. I think that the combine has already paid for itself in terms of man hours saved this season.

From a planting and maintenance perspective dried beans are fairly hands off. Planting is comparatively fast using a corn planter or grain drill and the field needs to be cultivated two, maybe three times during the season. It also doesn’t require irrigation, although irrigating would increase yields. But I am getting ahead of myself somewhat since we usually wait until December to make those decisions. I am just so excited at how well the combine worked on our dry run! 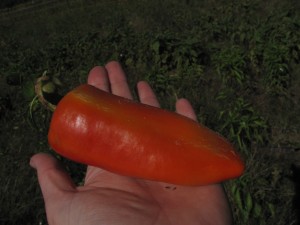 This will most likely be the last week for peppers in your box. As the weather has cooled down the plants haven’t put on more flowers, so we have picked the plants clean. Overall we have been very pleased with the pepper varieties we grew this year. The only exception was a paprika pepper that we tried to grow called Feherezon. It is a very long season pepper and is supposed to be harvested and then hung to dry. Once dried you crush it and it becomes paprika.

The main problem with this, is that you need to have blemish free fruit in order for it to dry down properly and not rot in storage. Of all of our peppers, the Feherezon variety was the least disease resistant and every single pepper had blotches, insect damage, or sun scalding. Needless to say, we will not be growing that variety again.

I have mentioned in earlier newsletters that our winter squash harvest was not as epic as I had hoped. Not only did the plants not produce well, the squash themselves are not holding well in storage. Normally I would tell you that squash will store well on your counter for several weeks, or even up to a month. But given the issues that we have been seeing in storage, I recommend using your squash within a day or two.

As I write this newsletter, Tyler is out spreading the bean shells from the Jacob’s Cattle beans with the manure spreader. We are trying to return as much organic matter as possible to the fields. This afternoon we will start harvesting for this week’s deliveries. We couldn’t have asked for a more beautiful fall day. On days like today, it is nice to be a farmer!