Home/Information/This Week on the Farm 1/26

Well it has been a couple of weeks since we last updated our farm blog. Tyler and I took a much needed break from the winter weather and visited his parents in Florida for ten days. If you sent in your paperwork in the last two weeks, that is why you haven’t received your confirmation and receipt yet. Thanks for your patience as we get organized and caught up.

While we were in Florida we couldn’t help but do a few ag related activities. We went to a citrus farm where I had the best orange I have ever had. I also ate a very sour grapefruit slice that had me making faces for about five minutes. I don’t like grapefruit, but I am determined to keep trying it. If it is in season and we are 100 yards from where it is being grown, I feel like I should walk the walk and eat seasonally. I did have to have another orange slice in the end to get rid of the aftertaste.

We also visited a CSA while we were there. It happened to be right across the street from a nature preserve, so after a nice stroll near the bay we stopped by. They were nice enough to let us walk around, and we were lucky enough to chat with one of the workers. I think the most interesting thing was that their season is reversed. (It totally makes sense, I just had never thought about it before.) They start out their delivery season in November and have all of the warm season crops like tomatoes and peppers right away, and then they move into cool season crops like lettuce and cabbages in January which is their mid-season.

The woman we talked to said their biggest difficulty is with disease and insect pressure. Humidity is so high that growing conditions for many pests are ideal. They can end up with outbreak after outbreak of some of the soil born diseases, which makes it very difficult to grow some crops. Their soil quality is also very poor since much of the land is in tidal areas where it is very sandy. She said there are some crops like Brussels sprouts and garlic that they can’t grow because the growing season gives the wrong temperatures at the wrong times. While we were there we also checked out their greenhouses, irrigation system, and washing station. It did give me a little boost of energy to be out in rows of vegetables again, and I think Tyler and I are both ready to see green things in Wisconsin. 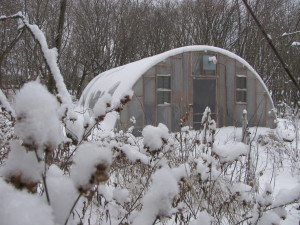 Seed packets have started to arrive. In the next two weeks we need to order media and get our seeding schedule finalized. Last year we spent a lot of time organizing our seeding schedule, so this year we won’t have to spend as much time making big decisions about when to plant every crop. Based on how things went last year, we know what crops need to be planted a little earlier, in fewer/larger quantities, and what we should try to transplant instead of direct seeding. Farming is unlike any other profession that I can think of. In many jobs you are able to see a problem and fix it right away. In farming, in a lot of areas you have to wait an entire year before you can try your solution. With four whole seasons under our belts, we have a lot of experience to work with and it is really rewarding to see your solutions work.

Right around Valentine’s day we start seeding onions in the germination greenhouse. I am really excited for the season to start and to see green again!

If you have sent in your paperwork this month we want to give you a big thank you!!! January is a very expensive month. We order seed, media, plug trays, irrigation supplies (since we can get a fairly sizable discount), brochures, stamps, and tons of other little things to get the year rolling. By sending in your share early in the year we are able to purchase everything we need without going in the red. So THANK YOU!