Home/Information/This Week on the Farm 2/17

Well, it has almost been a month since our last post. So much for a weekly update! The end of January was very slow. It felt like a waiting game since most of the paper work and ordering was done. Finally this week we got to start seeding some things, which felt like a huge relief to be able to start working on the farm again. 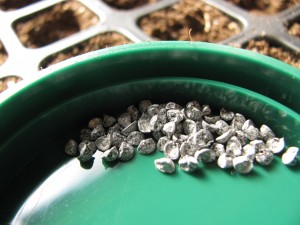 On Monday, I planted fifteen 200-cell trays of onion seeds. That equalled about 1,000 seeds of three varieties of onions. The seeder (pictured on the right) that we ordered from Johnny’s Seeds didn’t work as well as I had hoped it would. I think that is because the seeds are so irregualarly shaped that they wouldn’t come out of the hold evenly. This meant I had to seed each cell by dropping one seed in by hand. At least the seeds are large enough that I could grab them with my fingertips and didn’t have to grab each seed with a tweezers. I am hoping that other seeds that are rounder will work well with the seeder since it is time consuming to drop each seed into one cell at a time. 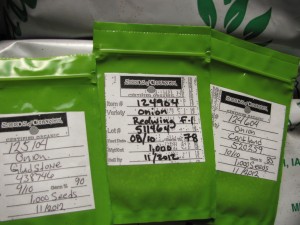 Tuesday I seeded three flats of scallions in regular 10 x 20 flats. I seeded each flat fairly heavily and we will probably need to transplant them before they go into the field this spring. We are seeding the scallions a lot earlier than last year because we would like them to be larger in the earlier boxes. This week was the first of three plantings of scallions. 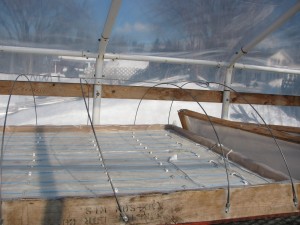 I am still waiting to water the flats in, and hopefully I will be able to do that later today. The germination boxes are ready to go. The heat tapes are all in working order and I repaired the night-time covers yesterday. I ran into two snags yesterday which prevented me from watering the flats and actually starting the seeds. The first was the bleach water pump that I was going to use to sanitize the boxes was broken. I spent this morning trying to fix it and ended up going to the store to buy a new one. The other snag was the water pump in the basement of the barn is frozen shut and I need water to rinse the covers and the boxes once I sanitize them. I am hoping that the warm weather today will thaw out the pipes and I will be able to get the greenhouse ready. 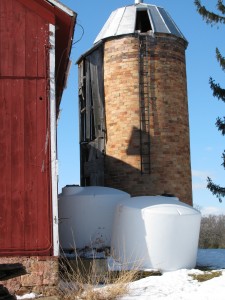 In other news we bought two new bulk tanks for our new field. They are still sitting in the yard waiting for the warm weather to allow access to the new field. They are surprisingly light, but unwieldy, so it was nice to have Tyler’s brother come and help move them off of the trailer.

Last week Tyler and I got to speak at the UW Hort Club meeting. We were very excited to go back to good old Moore Hall and talk about starting your own C.S.A. We hope that club members will come out this spring and take a tour and maybe help us build our new high tunnel. If there was one thing that we wished we had more of as students it was practical knowledge and we would like to share that kind of knowledge with as many people as possible.