I hate to admit it, but the signs of the end of summer are starting to appear. The early mornings have been getting cooler, the sun rises a little later and sets ever sooner, and even the geese are starting to gather up. I have seen two small flocks here in the last week, each about 12-15 birds. The other sign is the end of the season for our high school and college helpers. This week is their last week of helping us pick and pack your vegetables for the summer. They head back to school next week, and their help will be missed. We would like to thank Brady Anderson, Colin Snyder, and Alyssa Gilbert for all of their help this summer. Also, to George Scott, Greg Rowe, and Molly Carlson for all of their help as well, these three are all returning to school as teachers.

It seems like a mass exodus of help around here! On top of our helpers leaving, Kate is the new head volleyball coach in Rio, so she can no longer make deliveries, she has practice every night! So, there may be a new face or two at the drop off locations beginning this week. I (Tyler) will probably be in Madison and Appleton from here on out, and we will have others man the Rio and J.J. Keller drop-offs.

Also, we have had a few people ask just how long our season goes. In fact we have  just passed the halfway point, this week is Week 11 of 20. So you have this and 9 more boxes of vegetables to go. Our last drop off week is October 26-27. 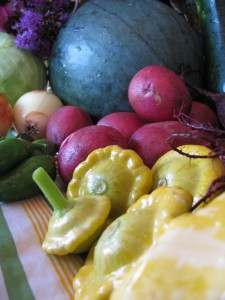 As for activities on the farm this past week, we haven’t had a lot of field action in the last few days, other tasks have taken our time. We are in the middle of seeding crops for fall plantings, this week’s crops include spinach, arugula, and more salad mix lettuce and romaine lettuce. Next year we are going to change up the way we grow lettuce, instead of growing all the varieties together in one mixed planting, we are going to order each of the varieties separately and grow them separately. This is to facilitate the sorting process when we are washing. It will be easier to pick out the bad leaves when you are only looking at one type of leaf at a time. We would then mix them before we bag it up.

Also this week, we hope to get some tilling done in order to put some of our land into its fall cover crop. There are a few spots that are done for the year already, and the sooner we get a cover crop growing the more green manure we can add to the soil next spring. 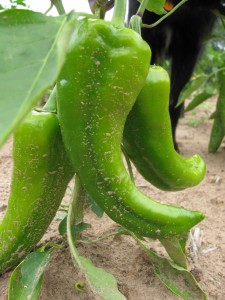 In vegetable news, our tomato season is just around the corner FINALLY! We have a few individual tomatoes turning pink in the patch today. The cherry tomatoes are just starting, enough that a few of you may get some in your box, others will get okra or eggplant. The bell peppers are finally coming as well, and there are enough for one or two for everyone. 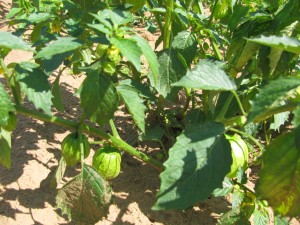 The powdery mildew has spread quite rapidly in the cucurbits in the last few days with the rain and the dewy mornings. So much that we are starting harvest later in the the morning this week to let the sun get higher before we go in to pick our summer squash, cucumbers and melons. Hopefully our winter squashes are far enough along that the yield won’t suffer significantly.

Also this week marks the first drop week for our Apple Shares. We are pleased with the number of people who have signed up and your first apples from Lepacek’s should be with your box today!