Home/Information/This Week on the Farm 4/12

It feels like the rush is on. Thankfully we have had nice weather during the day to get a lot of our jobs done. It is sometimes hard for me to remember everything we have done in the last week, but here goes. 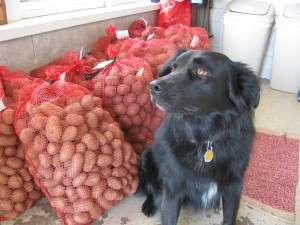 Last week we drove down to Vermont Valley Community Farms in Blue Mounds to pick up our seed potatoes. They are the only producers of certified organic and state certified clean seed in the area. We bought our potatoes from them last year and were very pleased with the flavor of the different varieties. This year we bought 400 pounds of potatoes. We have a white and yellow flesh potato, red skinned potatoes, french fingerlings, and red fleshed potatoes. This weekend we are hoping to cut all of the potatoes and, if the weather holds, get them in the ground. 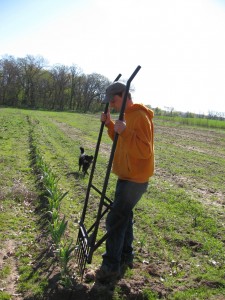 On Friday we delivered about 20 pounds of overwintered leeks to Monty’s Blue Plate Diner. We had left over leeks last fall and decided to hill them and see how they fared. They over wintered pretty well given the lack of attention we gave to them. We didn’t want them to go to waste and we didn’t think they would hold until our first boxes are delivered, so we took them to the diner. It was a great opportunity to try out our new broadfork that our employee, Colin, made for his high school shop class. It worked really well and if we were grading him he would definitely get an A+.

Tuesday, Wednesday, and Thursday night we spent checking the temperatures every hour on the hour. As some of you may have seen on our facebook page, we covered the strawberries with row covers to provide a degree or two of frost protection. When the temps dip below freezing for an extended period of time, or into the mid-to upper-20s the row cover is not enough. Which means checking the temps until they reach 30 or so and then going out and turning on the irrigation. 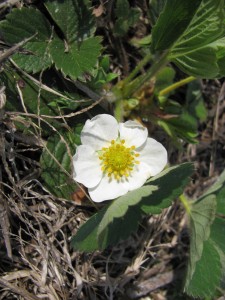 Thursday night wasn’t as bad. We woke up every hour on the hour to check the temperatures, but we didn’t have to go outside until 5 to turn on the sprinklers. Thanks to all of sleepless hours we were able to save the majority of the strawberry buds and blooms. This is the earliest Tyler has ever seen strawberries bloom. They might even be done producing by the time our first box goes out! If that happens we will have a pick-your-own patch. There is too much strawberry goodness to go to waste! 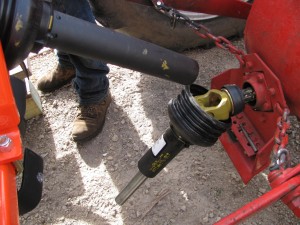 Wednesday we picked up our new 3pt tiller for our tractor. Since we have two old Ford tractors (made in 1953 and 1955) we are going to have to adjust the length of the p.t.o. shaft. For those of you not up to date with your farm lingo (I know I wasn’t until I moved out to the farm) p.t.o. stands for power take off and it is what drives the tines on the rototiller. Newer tractors have a longer distance between the rototiller and the hook-up spot on the tractor. Since our tractors are old, we have to shorten the shaft considerably. So much for hooking on and going right off the delivery pallet! 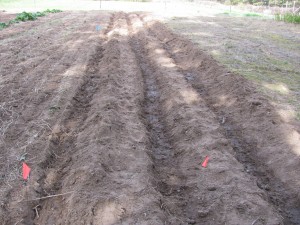 We would like to give a big thanks to Dave and Kate Carlson for helping us plant 250 crowns of strawberries, 50 crowns of rhubarb, and about 200 asparagus plants yesterday. We would like to give an even bigger thanks to them for agreeing to come back out today to plant another 300 crowns of asparagus. The strawberries and the rhubarb are fairly easy to plant, but the asparagus requires digging a trench 6-8 inches deep and 10-12 wide before you can plant the crowns. Once you dig the trench you have to spread the roots out and cover them with two inches of soil. As the season progresses you gradually fill in the rest of the trench. Hopefully we will have a large enough patch once it gets established to provide asparagus to our members. All three of these crops take one to three seasons to become established before you can start harvesting in any large quantity. 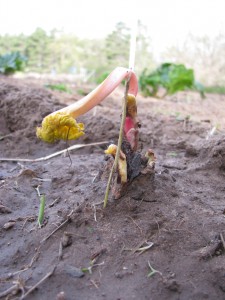 I will be at Harmony Cafe in Green Bay next Wednesday, April 18 from 4:30 to 8PM to promote our new pick-up site. If you know anyone who lives in Green Bay, let them know!