Home/Information/This Week on the Farm 4/13

The weather has finally turned and we have been able to get out into the fields and start working on some of our improvements that we wanted to make. Last year we added another twelve acres to the land that we work. This land is owned by Tyler’s parents and is attached to the land where the buildings are located. Between the buildings and the ag land there is a wooded area that has an ephemeral spring. In order to have access to the land we have to drive through the spring. Last year we got approval from the DNR and the NRCS to put in a ford to be able to drive through the area without changing the drainage of the spring. We contacted a local excavating/construction company and they stopped out this week. They are going to add breaker rock to the area where there is the most flooding and gravel the rest of the road to make a smoother ride for our ATV, tractors, and harvest vehicles. 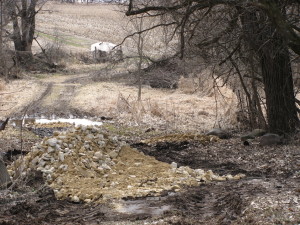 Although they thought the ground was solid enough, once they started working they found that there was just enough frost in the ground to create unworkable conditions with their equipment. They should be out in a couple of weeks to finish up and we are really excited that this project will be accomplished this year. We were worried that with the amount of work involved that it would fall outside of our budget and we would only be able to do part of the work this year and have to wait until next year to finish up, but it looks like we will be able to finish it this year. It will make trekking back and forth between the fields much easier and speed up harvest times by not having to drive through another field to get back to the buildings.

Since our last post we have also repaired and renovated our hoophouses. We initially had two houses that shared one wall. One side was heated and the other was unheated and had sides that we could roll up. This unheated side was used to harden plants off before they were transplanted outside. The hardening off process helps acclimate plants to the conditions outside, while still allowing protection against frost and other inclement weather. We have outgrown the space and decided to close up the sides, remove the wall that separated the houses and create one larger heated hoophouse.

This new space is already full. We moved all of our Allium crops (onions & leeks) in to this house since it is kept cooler at night. We also have about fifty trays of transplanted celery, or about a third of the celery, in the hoophouse. Now that we don’t have the unheated hoophouse, the push is on to build a new structure where we can harden our plants off before they go outside. We have spent almost two whole days clearing box elders near the east barn in preparation for our new structure. We are going to utilize part of the caterpillar style high tunnel that we already own and build a 12′ x 30′ high tunnel south of the east barn. This will give us plenty of space to place flats for three to four days before they are planted out.

We are trying to get this done by early this week so that we can start planting kohlrabi, onions, scallions, leeks, broccoli, cauliflower, and Brussels sprouts out as soon as we get the soil worked. With the rain we had this weekend we are hoping that by Tuesday or Wednesday we will be in the fields working the ground and that by the end of this week we will start transplanting.

We also begin our direct seeding this week. We picked up our seed potatoes and we have sugar snap peas and snow peas that are ready to go. We had hoped to start planting a little earlier, but with the rain that was forecasted for this weekend and night temperatures on Monday and Tuesday projected to be in the low 20s, we decided to wait a little longer. 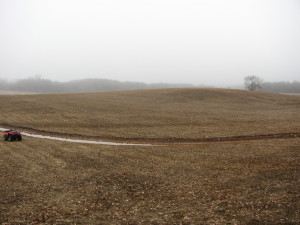 Our other major project that we have been working on is creating a retention pond and swales to try to prevent runoff and flooding in our back fields. Last June we had seven inches of rain in the matter of a few days. This created a lot of problems, including flooding and some washout. The soil was so saturated that not only did in kill large portions of our cole crops, but also prevented us from being able to get into the fields to cultivate and keep the weeds down. This last problem hounded us the rest of the season as we could not keep up with the weeds in certain areas. Some crops, like the carrots couldn’t compete with the weeds and we ended up with short, stubby carrots. They tasted great, but not the quality crop we had hoped for. 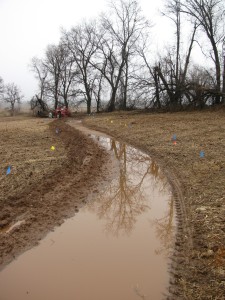 So, after the deluge last year we decided that we were going to install a grass waterway to prevent this from happening again. After talking it over with our friend Drew, a permaculture enthusiast, he suggested digging a retention pond and installing swales along a level contour to help mitigate any potential flooding from large rain events. The retention pond and swales help by collecting any water that is running into our fields from upslope and then spreading that water out over a larger area. By spreading the water out it slows the water down, giving it time to permeate the soil and thus preventing erosion. Last weekend we marked out our contours and this Saturday he came out and helped us install the first of two swales. 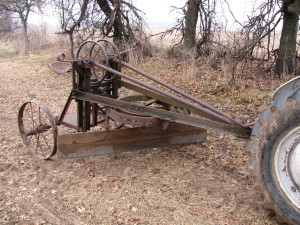 To start with, Tyler’s Dad used our two bottom plow to dig down and move the soil to the down slope side. Then we used an old, old road grader to level the area out. Although the swale is not finished, with the rain last night we did see how well it will work. When Tyler went out this morning, the swale was full of water. When he went back out an hour or so later, the water level had already fallen by about a half an inch. We need to level out a few areas and seed the area down into a permanent cover crop and then that one arm will be done. It went much more smoothly than I had feared and we are both really excited to see how it acts once the pond is dug and the other swale is in place.

We still have shares available, so if you haven’t gotten your paperwork in yet, now is the time!