Home/Information/This Week on the Farm 4/15

So a quick update on what we accomplished last weekend. With help from Tyler’s brother and some friends we were able to disassemble the entire building that had collapsed near the west barn. We discovered that the east wall foundation is a really beautiful field stone wall and we are hoping to have time to tuck point it to save it from crumbling away. We decided that we would really like to fill in the foundation with rock and gravel and come in with a foot or two of topsoil. We would be able to have a raised bed of perennial herbs right next to the barn. With all of the projects we have going on right now, that project might not get tackled until next year!

It feels like we have been driving all over the state this past week! On Monday we drove to Beaver Dam to pick up some materials for the packing shed project and to pick up a measuring wheel. We added a twelve acre field to the south of the barns this year and we need to be able to break it up into twelve individual fields with several roads and a thirty foot buffer on the east, west, and south sides. In order to do that accurately without a GPS unit we are going to use a measuring wheel and mark the fields/roads/buffers that way. We also picked up some blue flags to mark the edges of the fields.

On Tuesday Tyler repaired the heated hoophouse. The snow storm last December that dumped over a foot of snow did some damage to the plastic covering and a few of the hoops. It took him most of the morning to fix the damage and then he spent the afternoon cleaning and disinfecting all of the surfaces to get it ready for new plants. I think next year we are planning on moving those two structures and replacing them with a more sturdy greenhouse like the one we built last year. 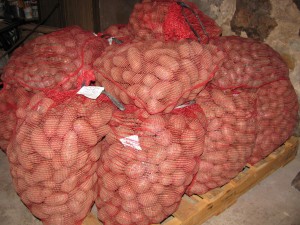 Wednesday I spent the whole day catching up on paperwork. Tyler and his father drove down to Blue Mounds to pick up our seed potatoes. We bought over seven hundred pounds of potatoes and combined our order with a market gardener from town to get the bulk discount. That meant that Tyler loaded and unloaded more than 1000 lbs of potatoes in one day. Since the weather has been so cold and rainy we haven’t been able to start any field work. The potatoes are in the basement right now hanging out until we are able to get into the field to prep the soil. Even if we were able to get into the fields right now, the soil is still too cold and the potatoes would either just sit there and do nothing, or rot. We would rather plant them a little later than scheduled to avoid losing the seed to rot.

Thursday we drove up to Cashton, which is near  the Sparta/Tomah area. Cashton Farm Supply is the only supplier of organic cover crop seed in the state that we have found. It is well worth the trip up there to save on shipping from one of the seed companies out east. When we got there they told us that part of our order won’t be in stock until at least August. Sadly this means another road trip later in the season.

Friday we finished all of this week’s seeding list. Our first tomato seeds went in this week along with the first couple of herb varieties for the herb packs that will be in your first box. As many of you know we had terrible luck with our tomatoes last year. This year every tomato seed that is planted in the greenhouse is first placed in a hot water bath for 25 minutes to kill any pathogens on the surface of the seed. We are also planting them in smaller celled trays so that it does not take as long for the roots to fill up the cell. This way they will be ready to plant out earlier and will not spend as much time in the greenhouse. We have split the tomatoes into three plantings. Last week was the first planting which included two varieties that will go in our high tunnel. Next week will be our first large planting for the outdoors. Two weeks after that will be our final planting. Every planting will be kept in a separate greenhouse. 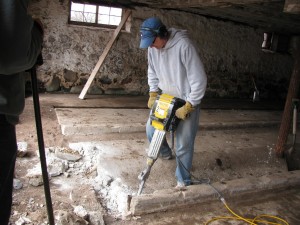 On Saturday and Sunday we spent all day in the basement of the west barn. Saturday was spent removing the last of the manure that had been frozen in place and moving concrete that had been knocked out last weekend out of the way. Sunday we rented a jackhammer and concrete saw to knock out the raised pads. In 1939 the owner of the barn created raised troughs for his dairy cows. The tallest part of the raised pad left only a little over six feet of clearance. We wanted to remove all of these sections so that we have a level surface to work on. There were two flat pads where the cows would stand. A third section had two troughs and the tallest section we mentioned earlier where the farmer could walk and distribute the feed into the troughs. The two flat pads came apart beautifully and the concrete underneath is flat and in really good condition. The third section wasn’t poured on top of an existing pad. Instead it was poured on top of field stone and clay. 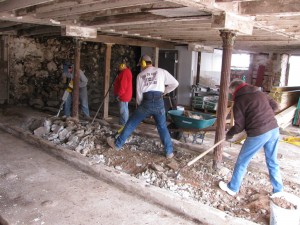 This week we are going to have to remove all of the field stone and prep that section for a new concrete pad. The area is about seven feet by twenty five feet, so it is a sizable area. But at least we don’t have to pour a whole new floor in the entire barn!

If you live in the Green Bay area we will be at the New Leaf Market CSA Expo this coming Sunday, April 21 from 11-3PM. Stop by and visit!