Home/Information/This Week on the Farm 5/14

Well last week’s update started with news about all of the rain we had been having, this week our update is about how dry it has been. With all of the warm sunny days the ground has dried out quickly and we have actually had to irrigate three of our fields this past week with over-head sprinklers. We haul water in a 1500 gallon tank on an old running gear and then run the sprinklers using a gas pump. We can run about eight sprinklers at a time with the manifold we have set up, and we are going to add two more outlets on the manifold to up the sprinkler number to twelve. Water is especially important with all of the direct seeded crops that we have in right now, like beets, arugula, spinach, turnips, Swiss chard, carrots, and parsnips. Without water, seed germination is poor. After germination the seedlings also need a enough water to put on size and to send out roots to find water deeper in the soil. 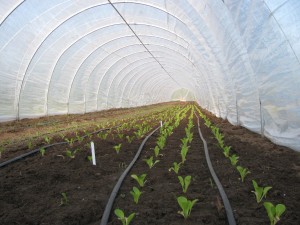 We set up our drip tape this week in our high tunnel where we have our first planting of loose leaf lettuce. We also seeded arugula and spinach in the high tunnel. The arugula is doing great, but the spinach germination was lackluster. We used seed we had left over from last season. Technically it should still be okay, but sometimes older seed doesn’t maintain a high germination rate. We planted more seed in each of next successional plantings to make sure we have enough for everyone, and we should have spinach by the first or second box.

Last week was a crazy week for insect activity. We discovered an outbreak of cutworms in our cabbage family field. Almost overnight we lost about 50% of our cauliflower plants and smaller percentages of our broccoli, cabbage, kohlrabi, and Brussels sprouts plants. Each cutworm travels from plant to plant and eats the stem tissue right at the soil line, acting almost like a miniture logger felling the transplants. Cutworms are notoriously difficult to control in both organic and nonorganic settings and will move from crop to crop and from vegetable family to vegetable family.

We developed a three pronged attack plan. First we went to Costco and bought 6,000 red solo cups and cut the ends off of the cups. Then we went out and picked around each plant, checking for cutworms beneath the soil line. If we find a cutworm we put it in a bucket of soapy water. Then we put the red solo cup around the plant, burying it about an inch to an inch and a half under the soil line. This acts as a barrier preventing the cutworm from being able to get at the plant. So far we have cut enough cups to protect the Brussels sprouts. As you can imaging it takes an enormous amount of time to cut the cups, inspect each plant, and put the cups in place. Time is in short supply on any farm in the spring, so we are doing the best we can to keep plugging away at the cup installation.

In addition to the cups, we ordered parasitoid wasps that will attack caterpillars and the eggs of moths.  This should help keep the population levels down to a more managable level. We are supposed to release the wasps once a week for six weeks. We ordered the wasps late last week and paid for fast shipping so we could release them as soon as possible for maximum effect, only to find out today that they won’t be arriving for another week. We are extremely irritated by the fact the company did not tell us there would be a delay when we placed the order. Even if they don’t arrive in time to help with the cutworms, they will help to control imported cabbage loopers which will be arriving any day now.

Our third method of control which we have in reserve is Bacillius thurengiensis or Bt. Bt is a type of fungus, and some strains of the fungus produce crystal proteins that have insecticidal properties. Since it is naturally occurring, Bt is considered appropriate for organic agriculture. We ordered some to have on hand as a last resort. We are going to see how well the cups and the wasps do to control the cutworms before we apply the Bt. So far it looks like the damage has leveled off.

In positive insect control news, we were able to finish digging our Colorado Potato Beetle trenches this weekend! The timing was perfect since the potato plants are just starting to peak through the soil. Hopefully the trenches work well as our first line of defense. In addition to the trenches, we purchased our second line of defense last week, two gas powered blower/vacs. When set to the vacuum setting, the gas blower sucks the beetles and the immatures off of the plants. We also learned a very helpful hint, which is to strap a filter to the end of the vacuum so that the insects don’t clog up the fly wheel. Hopefully with this new tip we won’t burn the motors out of our new blowers! 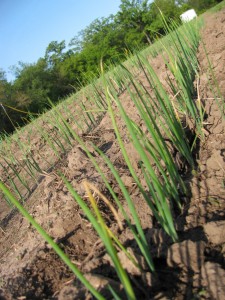 We planted the leeks, scallions, pac choy, and first planting of romaine lettuce this week. We also seeded carrots, parsnips, dill, spinach, radishes, beans, and peas this week. We have another planting of loose leaf lettuce to get in, as well as more radishes, spinach, and arugula. Pray for a little rain to water all of the seeds in, otherwise Tyler and I will be spending our evenings out with the water wagon irrigating all of the veggies! 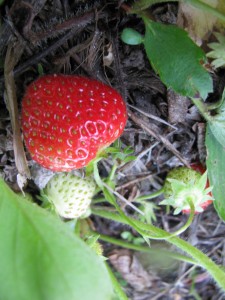 Our strawberries are starting to turn red. Since we had all of the warm weather in March, the berries are about three to four weeks ahead of schedule. Because of this, it is likely that they will be done producing by the time our first boxes go out in a month. We don’t want the berries to go to waste so we are offering them as a pick-your-own. For members who purchased a vegetable share, you get your first quart free. There will be a limited number of pre-picked quarts each day (we don’t have too much time available to spend picking berries), so most of the berries will have to be picked. Call us ahead of time so we know you are going to stop by, and we make sure there are berries available that day. Don’t miss out on the taste of fresh berries!