Home/Information/This Week on the Farm 5/9

As my father-in-law says there is a million dollar rain falling outside right now. Slow, steady, and relatively warm. It will do wonders for all of the plants we have in the ground right now and gives Tyler and I a much needed break. We both came down with nasty colds, so this past week has been an effort. Despite being sick we were very productive and we would like to thank everyone who stopped by the farm this week to help us out!

Late last week we pulled all of the straw mulch off of the garlic. Normally you can keep the mulch down and it acts as a weed suppressant, but our mulch came in with a lot of wheat seed heads that caused our garlic patch to look more like a pasture. We removed all of the straw so we could till between the rows and weed between the plants. With tonight’s rain the garlic should take off even more. 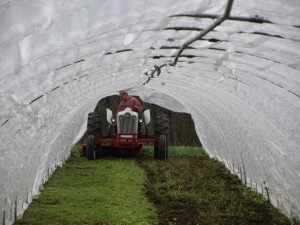 That same day we repaired the parachute cable that holds the high tunnel plastic in place. We also repaired a couple of tears in the plastic from winter damage. Once the repairs were done, my dad was kind enough to mow the lettuce, arugula, and weedy plants that had overwintered in the high tunnel. With the old plants mowed off we were able to run down the high tunnel with our 3pt rototiller. Now we can let the tunnel sit for another week to let any weed seeds germinate, re-till the area, and plant the first round of tomatoes in the tunnel. 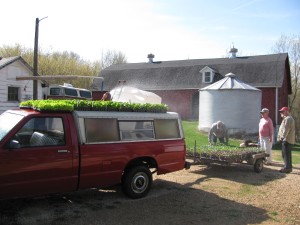 On Sunday we transplanted almost all of the cabbage family crops that are planted in the spring. There were a couple of varieties that went in a week to a week and a half later than we would have liked, but with the cold, rainy spring pushing field work back, it was the first opportunity to get transplants in the ground. There are now three types of cabbages, two types of napa cabbages, kohlrabi, broccoli, cauliflower, and Brussels sprouts in the ground! Since Sunday we have also transplanted two types of lettuce and direct seeded beets, chard, and spinach. Hopefully by tomorrow afternoon we will be able to direct seed lettuce, kale, arugula, turnips, and dill.

The major project of the week has been getting our new irrigation system up and running. After last year’s worst drought in a quarter of a century, we made the decision to invest in a more complete drip irrigation system. In the past we had used an overhead irrigation system that consisted of sprinklers attached to a three foot post to get them up off of the ground. A grid of about 8-12 sprinklers could be run off of a 1500 gallon bulk tank on wheels. This system works well for occasional use, but when you are facing month number two without a drop of rain, it does not deliver enough water directly to the plants to keep them producing at an optimal level. 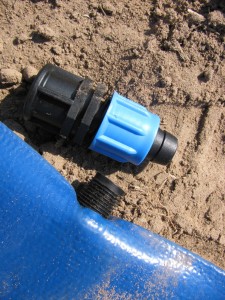 This winter Tyler designed a system that basically fills two inch blue lay flat hose from the well in the shop and carries it out to a bulk tank waiting in the field. The bulk tank acts as a reservoir to give us added volume with which to irrigate. From the bulk tank, a gas powered engine pumps the water through more blue layflat hose out to the specific field that we are irrigating. The system is set up so that either drip tape or overhead sprinklers can be used depending on what type of irrigation system we have chosen for that family of crops.

We tested the system yesterday and it worked well, but water volume was not high enough to keep up with demand. We think this is because we set up a filter near the well to filter out any sand or other large particles to keep the drip lines clear. We are going to move this filter down the line and place it after the bulk tank. We are going to attach the filter to the manifold that controls water pressure to the drip line header. This should allow for greater water pressure out to the bulk tank and still allow the water to be filtered before it travels through the drip tape. All in all, I am very proud of Tyler for designing and building an inter-changeable irrigation system from scratch that so perfectly fits our needs.