Home/Information/This Week on the Farm 6/13

It has been a busy couple of weeks on the farm. Since we don’t get in from the fields until after dark most nights, our weekly blog has fallen by the wayside. Now that the newsletter is going out each week, we will be better about keeping you all informed.

We would like to start by saying we are absolutely thrilled to be feeding over 85 families this year and that Monty’s Blue Plate Diner in Madison has again purchased a share and is also getting all of their lettuce from us! We would also like to thank J.J. Keller for allowing us to have a drop-off at their headquarters for their employees!

A note on the asparagus: our asparagus patch is not large enough or old enough to get enough asparagus for you all. Priske’s Asparagus farm in Rio produced the asparagus in your box this week. They do not follow organic practices in their production, but they are local. 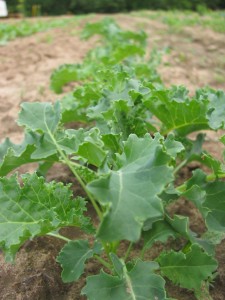 On to farm news…All of our crops are looking good, if just slightly behind where they should be. Everything is in the ground, except our tomatoes, eggplant, tomatillos, and okra. Some of you will remember we had an outbreak of bacterial spot that wiped out our first planting of tomatoes last year. Well, it happened again. We ended up having to destroy our first planting of tomatoes, tomatillos, eggplant, and okra. Bacterial spot cannot be treated, even in the conventional way with pesticides (which we don’t use!), so our only course of action is to destroy the plants before they can infect other plants.

The second planting is looking great and we will be able to get them into the ground this weekend. We detected the outbreak earlier this year and were able to replant sooner. We hopefully learned our lesson (or three of them) this year! One-never reuse carrier trays, two- never wear last season’s boots that may have the bacteria on them in the new greenhouse, three-don’t plant tomatoes so early that they get so big there is no air movement to dry out the leaves! 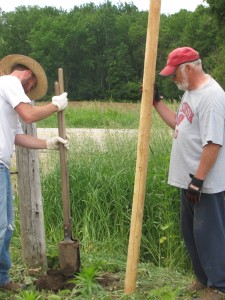 In other news, this Sunday we had a bunch of help putting up fencing around our new field. By this weekend we will hopefully have the fencer in and the electricity running so we can keep the deer and other critters out. It looks really great!

We spotted Colorado Potato Beetles on our potatoes two weeks ago. I think (fingers crossed) that we have managed to stay on top of them by picking the adult beetles and removing any egg masses from the fields. We have spent over 20 man hours on our hands and knees going through the potato plants leaf by leaf to make sure they don’t overtake the potato plants. A few beetles aren’t too much of a problem since potatoes can take up to 30% defoliation before yield decreases. So hopefully with our prompt removal of anything we see, we should be okay. 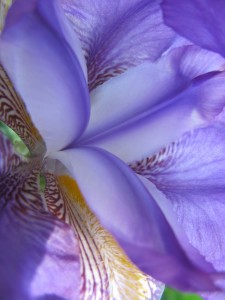 Become a fan on our facebook page. We upload videos and photos onto our page, so don’t miss out on other farm news!