Home/Information/This Week on the Farm 6/21

We are onto our second week of deliveries and the veggies keep growing! We are happy to report that things are looking great and finally seem to be taking off. Our strawberries have been producing like crazy. This weekend we picked close to 100 quarts off of our small patch. Although this will probably be the last week in the boxes, we may still have some berries through the end of June. I can’t believe how well they have produced this year. It makes those up-every-hour-to-check-the-temperature-nights-to-protect-against-frost worthwhile. 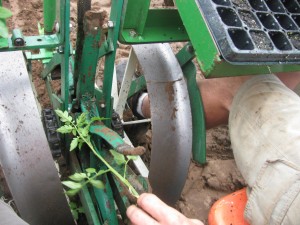 Tyler and our helpers are out planting the tomatoes, eggplant, and okra this morning. To see video of the two-row planter in action check out our facebook page. The two-row planter really speeds up the process and we are very glad we found it this winter.

The tomatillos need another day or two to recover from an accidental encounter with our weed eater. I had taken them out of the greenhouse to monitor for disease ( I am now super paranoid about bacterial spot), and I neglected to tell everyone where the trays were. When we went to clear the weeds from around the greenhouse with the weed eater, the trays got hit. There are still over a dozen plants that are fine ( & disease free), and with a little luck some of the plants that did get hit will resprout. Given how productive tomatillos are I don’t think it will be a problem that we have fewer plants. Last year we had tomatillos coming out of our ears because we planted so many plants. Most of the fruit ended up going to waste because we couldn’t harvest it all. 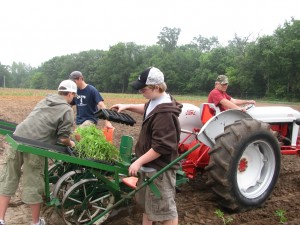 In other crop news, the peas are getting ready to flower. Unlike the beans, they have managed to outcompete the weeds. We are going to spend time weeding in the beans this afternoon to release them from the weeds.

We have almost reached the stage of the summer where most of our energy goes toward weeding. We have a few large projects to finish up, such as putting the row covers on over the cabbage and other cole crops, but things seem to be under a little more control than last year. Planting everything in standardized row widths has really helped. 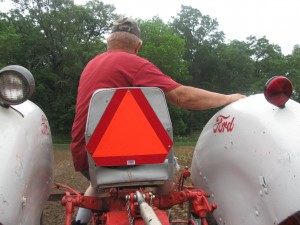 Don has been using the cultivator to weed between rows in a lot of areas, but we haven’t had enough time to weed in between plants. Most things are able to handle a little competition, but we have found out that spinach and arugula don’t handle neighboring weeds very well.

The rain has helped us out immensely and all of the plants seemed to have grown several inches overnight. Now we just need a couple of sunny days to dry the soil out a little so we can cultivate in a couple of areas. Like all farmers, we never seem completely satisfied with the weather. 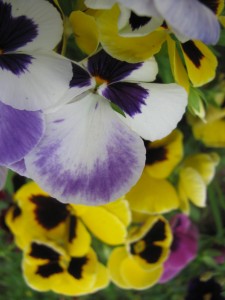