Home/Information/This Week on the Farm 6/28 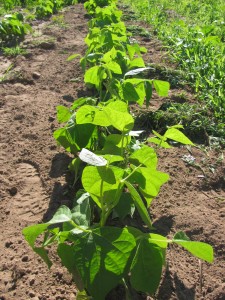 We had a productive week this week on the farm. We managed to get a lot of weeding done thanks to Don’s time on the tractor. We spent Sunday afternoon cultivating the potatoes, onions, leeks, and scallions. Then we moved onto the direct seeded field where we have the beets, kale, swiss chard, cauliflower, and other crops. It takes a lot less time using the tractor than trying to do it all by hand or with a rototiller. Although it is a huge improvement, we still need to go back and weed between the plants. 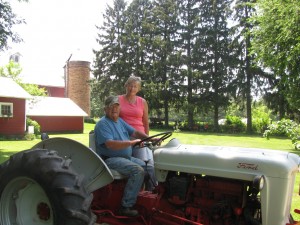 We also finished weeding the raspberries. I don’t think we will have enough this year to put in all of the boxes since this is only the second year they have been in the ground. They are starting to take off and I am glad we installed the trellises this spring. Hopefully by next year we will have expanded our patch to be large enough to have our own raspberries in the boxes.

In non-weeding news, our sweet potatoes finally arrived! It was very difficult to find an organic source of sweet potatoes, but we were lucky enough to find a farm in Iowa that grows sweet potato slips. As you can imagine being in Iowa, they had the same rainy, cold spring that we experienced. The slips finally came on the last day that they had given as the delivery window. They were also totally different varieties than we had ordered, but we are looking forward to seeing what they are like once they start producing.

We used our potato planter to create hills and then planted the slips about a foot apart. We learned that the best way to increase yield is to occasionally pull up on the vines. This prevents them from sending out new roots that aren’t directly under the hill. If the plant sends out roots that aren’t under the hill it drastically reduces quantity and quality of the sweet potatoes. Once we got all of the slips in we watered them in and they are looking pretty good.

The Colorado Potato Beetles have started hatching. We thought for sure we had them under control, but there are definitely still a lot of them out there. Tyler and I spent last night scouting the field and using our new gas powered blower/vac to vacuum the larvae up. We got through about half of the field before it got too dark for us to be able to see the larvae. We will go out again on Friday and finish vacuuming. It works well, but it will probably take another time or two before we feel the population is low enough not to cause a reduction in yield. We did notice that they seem to prefer the leaves of the French Fingerling to the Adirondack Red potatoes. We will keep that in mind for next year. 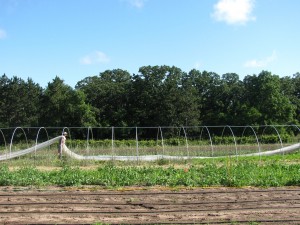 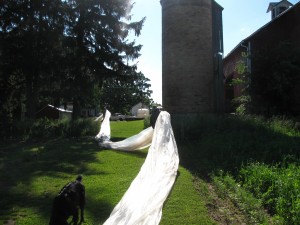 Tyler and our workers are currently out in the field working on the high tunnel. We are taking off the poly that we used to keep the tunnel warm during the spring and replacing it with shade cloth. The shade cloth will keep the lettuce cooler and shaded to prevent bolting. This way we will be able to have lettuce during the end of July and August when the weather is normally to hot for a cool season crop like lettuce.