Home/Information/This Week on the Farm 6/30

We hope that you have been enjoying your first boxes of produce. We get a lot of questions early in the season from new members about all of the greens that are in the first couple of boxes. It can seem overwhelming when you have a box full of greens and you don’t know how to cook with them. It can seem even more overwhelming when it is the third week of kale in your box and up until this point you have never cooked with kale. For those of you who are new to CSA, keep trying new recipes. Even if you didn’t like the kale salad recipe from last week, you may like the kale chip recipe on this weeks newsletter. And no, we don’t put kale in every box. We were planning on putting collards in your box this week, but they were hit by the flooding last week and are suffering from lack of oxygen in the soil. We are waiting to see if they are able to bounce back, but even if they don’t, we have a second planting that will be going in the ground in the next week or two.

This week you have beet greens in your box. This is one of our favorite items to put in the boxes early in the season because it allows us to give you produce when there are not a lot of items ready to be harvested yet, while at the same time giving us the opportunity to thin our plantings of beets. Beets have compound seeds, so when they are seeded early in the spring there are usually 4 to 6 seeds that are set down in one location. If we let the beets stay the way they are planted, they will compete with all of the other beets for nutrients, thus forming small beets. They will also be oddly shaped due to growing right up against each other. By thinning the beets out to one plant every couple of inches it gives each plant enough space to form a nice sized beet. So, by eating your beet greens now, you are not only getting yummy food, but you are also helping ensure tasty beets later in the season.

We have reached the turning point in the season where the cool season crops are almost at an end, but the warm season crops are just not quite ready to start producing. This will probably be the last week of lettuce for awhile as the heat of the summer kicks in. We have a few more plantings that are ready to go in, but we are waiting to harvest the last of the lettuce in the high tunnel. Once those are harvested this week, we can till under any of the remaining plants that have started to bolt and transplant this round of plants in the high tunnel. Once we are done transplanting we are going to take the plastic off and put up shade cloth instead. This should help the plants get through the hot days of summer and give us lettuce in August.

This will also be the last week of radishes until late this fall (a welcome relief to some of our members). If you dislike radishes, try roasting them in the oven with a little olive oil and sea salt. It takes away the bitter taste that many people do not like. You can also try boiling them in sugar water, that does the same thing.

In the next couple of weeks the summer squash will start to take off and we are looking forward to the first cipollini onions of the season. I am really excited at how well the watermelons look. We have three different varieties we are growing this season. Our standard watermelon, Sugar Baby, has been one we have grown since the beginning. We are also trying the Yellow Moon & Stars variety that we trialled last year. It is a large watermelon and only goes in our full boxes (it won’t even fit in our half box totes). It is a yellow fleshed watermelon and is very tasty. The third variety is new this year. It is called Klondike Blue Ribbon. It is another large watermelon. My mouth is seriously watering just thinking about later this summer when they are ready! 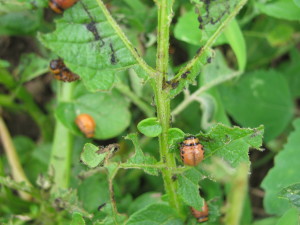 It looks like we have survived the cutworms for this season. We haven’t lost any more plants in the areas where we were hit hard by the cutworms and the cutworms have reached the point in their lifecycle where they will not be causing damage. We have, however, been hit by a ridiculous number of Colorado Potato Beetles in our potatoes this season. Between the flooding and the insect pressure we are not planning on having a very good potato crop this year. The flooding has prevented us from being able to get in the fields to use any of our control methods (vacuuming, hand picking, and a new method of using a broom to knock the larvae into a pan of dish soap). This is the second year that we have had issues with our potato crop and we are actively planning a new strategy for next season. Crop loss is definitely one of the risks we face by not using any chemicals on our farm, but it is one we accept gladly because we know how important it is to our members that we do not spray their food. This does mean that we may need to change the activity for our second volunteer event in August. But never fear, there are always interesting jobs to do here on the farm! 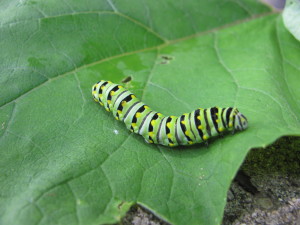 This morning while we were out weeding the basil and parsley we found a lot of swallow tail caterpillars on the parsley. We didn’t know if they were a pest or not, so we brought a couple inside to identify them. I took a picture to show our members since I thought it was very pretty. Every season we see more and more different types of insects on our farm (most of them do not cause problems). The longer we farm without using chemicals, the more biological diversity we see here on the farm. For example, in the last five seasons we have seen the number of earthworms increase dramatically. When we first starting farming we saw maybe a dozen the entire season. Just this morning while we were weeding we saw triple that number. It just goes to show what a difference not spraying chemicals has on the environment.