Home/Information/This Week on the Farm 6/30

We have been absolutely thrilled with the weather we have been having this summer. This past week we have had multiple rain showers, each bringing about half an inch of precipitation. We have lucked out each time and the rains have come down relatively gently and we haven’t had any severe weather. All of our plants, including the weeds, are loving this weather. It has stayed cool enough that our cooler season crops like lettuce and peas are doing well. In fact, this week marks the first delivery of snow peas. Next week the sugar snaps should hopefully be ready.

Speaking of sugar snap peas, we are trialling a new variety this year. We have tried two other varieties of sugar snaps in the past and germination rates have been absolutely terrible. This year we are growing Cascadia from High Mowing Organic Seeds and we are pretty happy with the stand. The plants are no where near as prolific as the snow peas, but they are doing much better than in past seasons. There are a lot of pods on the plants, but they haven’t yet formed peas. 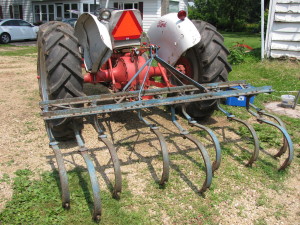 These next couple of weeks are going to be key to weed control for the rest of the summer. Any time that isn’t spent harvesting and packing your boxes will be spent cultivating and hoeing. Thankfully we have been able to purchase several types of cultivators over the last five years. We have a three row, a two row, and a two row cultivator with hilling discs. In addition to these three spacings we can also take the center shanks off of the two row cultivator and be able to just cultivate the aisles in crops like onions that are grown in a five row block. Having the different options makes cultivating much easier since we have multiple row spacings that are used throughout the farm. We don’t have to mess around trying to adjust the spacing of the shanks, and instead can just unhook the cultivator that we are done using and hook on another one.

I have been doing most of the cultivation this year, and I really like it. It is somewhat stressful, since if the cultivator hits a rock it can bump you off center, but for the most part I find it to be extremely satisfying. The main thing with cultivating is you have to pay close attention to make sure you are staying in line and aren’t accidentally ripping up the plants you want to leave in place. The best part of farming is looking back at a row you have just cultivated to see freshly tilled soil and no weeds. Sadly, that is a fairly fleeting moment during the summer months as new weeds germinate very, very quickly.

In most cases after we go through with the tractor and cultivator we come through and hoe between plants. We have three different types of hoes to choose from. The traditional flat hoe, which works well on grass, the saddle hoe, which works well on small weeds, and the cobra, which works well in tight spaces. We also have a low wheel cultivator which Tyler fabricated himself (it was my Christmas gift two years ago- a gift from one plant nerd to another). The low wheel cultivator  moves really quickly on young weeds. At this point in the season the weeds are too large for it to work well. This fall when we start planting our fall crops, the wheel hoe will make a come back. Tyler has the materials build two more low wheels, but we just haven’t had time to build them yet.

The next crop that is on our radar for hoeing is the tomatoes. We have ten rows of tomatoes and two rows of tomatillos. We hoed two rows last week, so we have a total of ten rows left to clean out. For those of you who have not read earlier newsletters, the most damaging pest we have on our farm is the cutworm. Cutworms are only problematic early in the season, but they can cause a lot of damage in a short amount of time. The cutworm will chew through the stems of young plants virtually overnight. To protect high value crops like tomatoes, we use a barrier method to protect the plants. We cut the bottoms out of several thousand red solo cups and place a cup around each plant at least half an inch into the soil.

By placing the barrier around the plant we can either keep the cutworms out, or trap them inside of the cup where they can only damage one plant. We had very little loss in our tomatoes this year, and it is now time to remove all of the cups. The added benefit of the cups is that they make the initial hoeing very easy since the cups act as a shield from the hoe. This week we will try to get the rest of the tomatoes hoed and the cups removed. We also need to put up the trellising since many of the tomatoes are getting to the point where they need to be trellised. 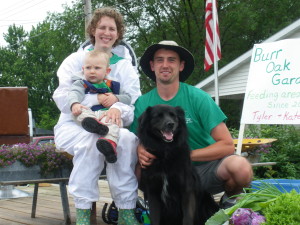 The Rio Sesquicentennial was great! Not only did we have a great turn out for the Garden Tour, we also participated in the parade. Our farm had a joint float with Tyler’s mom’s business, Kay’s Kut & Kurl Korner which has been in downtown Rio for 43 years. Tyler drove one of our tractors while the rest of us rode on the bulk tank trailer (sans the bulk tank). Tyler and our son wore our farm shirts and I wore my bee suit. Our dog, Wash, had a sign around his neck which read “Head of Pest Control.” It was a lot of fun and I hope that when the bicentennial roles around Devin will see a picture of himself on the float.