Home/Information/This Week on the Farm 7/16

It always amazes me the impact that spring weather has on crops the entire season long. It is the middle of July and there are many crops that usually would be producing full tilt by now that are just starting to put on fruit. The cool, wet spring delayed growth of many of our crops by about two weeks.

We live in a society that is so divorced from the land that this connection between weather two or even six months before and what is happening to our crops/general environment now is no longer recognized. I think that was one of the biggest things I learned when we started farming four years ago. Even with a degree in agriculture, there was nothing that prepared me for the actual impact that weather has on what we grow and eat. Modern grocery stores and the associated middlemen insulate people from this relationship creating the impression that certain types of food are always available no matter what the weather is like. We hope that these newsletters help bring that relationship back into focus, because to us, the understanding of where your food comes from and why you are eating what you are eating is so important.

The fields are looking pretty good, but like I mentioned before, it is the middle of July, so this is the time of year when the war against weeds is at its peak. Weed growth, especially grass, is the one major downfall of not using black plastic mulch on our farm. Many, if not most other farms that are of a similar size to our operation use black plastic mulch. This means that they do not need to spend as much of their time and their budget on labor to combat weeds as we do.

Tyler and I made the decision when we started farming that we would rather pay our employees, who are part of our local economy, then pay an out of state company tons of money on petroleum based products that can only be used for one season and then end up in a landfill because they are too dirty to recycle. Other reasons for not using black plastic include the need for specialized equipment to lay and remove the plastic, the need for drip tape underneath the plastic that you cannot inspect for leaks, a change in the microclimate for soil microorganisms, and increased habitat for voles and other creatures that go after root crops. We may be the odd ball farmers for making this decision, but for us there really was no other decision to be made. 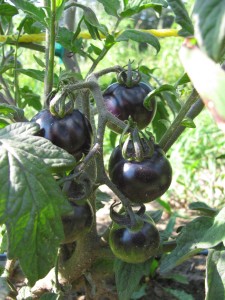 This past week we made a lot of progress cleaning up our fields. One of the major tasks that we finished this week was weeding all of the bulb onions. This was a task that took multiple days of all of our employees pulling weeds by hand. There are other types of onions in the field, but they are a shorter day length and not worth our time to go through and weed right now since they won’t be spending too much longer in the field. Instead we will jump to the other side of the Allium field and start to work on the leeks next week.

We are hoping for some rain later this week, but chances are that we will need to fire up our irrigation system in the next couple of days. There are some direct seeded crops that need to be watered in this week or they will not germinate and will just bake in the soil. I am pumped that we are pretty much on top of our fall plantings this year. Usually that is something that falls by the wayside, so the fact that everything is scheduled and being planted makes me very hopeful that we will be able to have more crops to choose from this fall.