Home/Information/This Week on the Farm 7/21

I want to start this week’s newsletter off by saying thank you to all of our members who have sent in recipes so far this season. I have a lot of recipes saved up for use later this fall when a lot of the greens  and the radishes make a come back. If you don’t see the recipe you sent in, don’t despair, I have them all saved in a folder and I am just waiting to put them on the newsletter when that item is once again in the box.

A few things about the items in this weeks box. The cucumbers and zucchini/summer squash are just starting to take off. This week we did not have enough of each crop to go in everyone’s box, so we paired the item up to give everyone a taste. We are hoping to have enough cucumbers to give one to everyone, but we we are not sure if we will have enough. Also, some insect (we aren’t exactly sure which one) has been chewing on the cucumbers. It does nothing to the flavor or storage capability of the cucumbers, but they are not as aesthetically pleasing as we would like  them to be. They will still taste great and if you peel the cucumbers you will never know the difference. 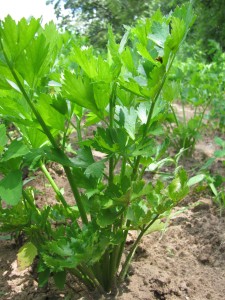 This is the first week that we have celery in the box. For those of you who are new to our CSA you will notice that the celery looks (and tastes!) a lot different from what you find in the grocery store. We do not pump our celery full of water to get the stems massive and because of that the flavor is much more intense. You can cook with the entire plant, including the leaves, and you can freeze any little bit you have left over for making stock later this year.

The kohlrabi in this weeks box are the Kossak variety and yes, they are supposed to be large. This variety can be up to six or eight pounds per kohlrabi bulb. We harvest them smaller than that to make sure they fit in the totes! This may be the last week of kohlrabi until later this fall. If you haven’t tried roasting them, I recommend giving that a try.

The cabbage in your box this week may have a few holes from imported cabbage looper caterpillars. To control the loopers we release a parasitoid wasp that lays its eggs in the eggs of the loopers. We love this method of control because we can get somewhere between 80 to 90 percent control without having to spray any chemicals. It does mean that sometimes there is a caterpillar, or a cabbage with bite marks on it that may make its way into your box, but we try very hard to make sure we only put the nicest heads in your totes.

We have spent a good portion of last week and this week weeding in the peppers and eggplants. We have twelve rows of peppers and four rows of eggplants. We have five more rows of peppers to weed and then we will be through both of those crops. The Colorado Potato beetles are doing a little damage to the eggplant, but when we weeded them Monday morning we also squished any larvae we could find. I think that is one of the grossest jobs on the farm. They smell terrible and they squirt everywhere. They seem to like the traditional eggplant more than the Japanese variety. 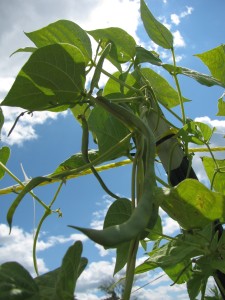 We have a lot of tiny peppers on our pepper plants, and a lot of blooms! The Japanese eggplant, which are the long skinny type, also had quite a few eggplants that were two inches long. Perhaps by week 8 we will have eggplants in the box! We are pretty excited about that since last year the Colorado Potato Beetles completely wiped out our stand of eggplant.

The tractor repair is coming along. Tyler was able to find parts for it in Columbus. Now we are waiting on Don to figure out how to remove one more piece before we can reassemble the whole thing. Thankfully, our other tractors are still working and we have been able to do some field work with them. The main issue has been that we got so much rain we can’t get into the fields to do tractor work. Hopefully we will be able to do more cultivating this Wednesday. 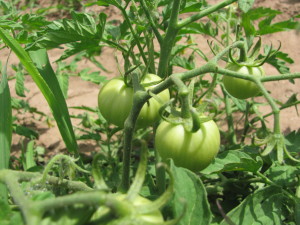 The second line of trellising is up on our tomato plants. The wider spacing between rows is working fabulously. We are able to cultivate even with the trellising in place, and we were able to mow down the center to leave some plants in place to prevent erosion. There are a lot of green tomatoes out there and the cherry tomatoes are coming along nicely. My favorite activity has been trellising the tomatillos because you can hear the bees humming!