Home/Information/This Week on the Farm 7/29

Well, it is the first week of beans! We have two types of beans in the boxes this week. The yellow wax beans are particularly tender this year and shouldn’t take very long to cook in any recipe. The Italian flat beans in your box this week are one of our standards. We have grown it every year that we have farmed and it always produces a tasty crop. Every year we freeze a lot of these beans for use in soups and hot dishes during the winter. If you end up with an over abundance of beans, I recommend blanching the beans and then freezing them. You will thank yourself for the effort in the middle of winter.

We spent a good portion of Monday harvesting beans for Tuesdays CSA members. Even with five or six people picking it takes awhile to harvest over two hundred pounds of beans by hand. We will be back at it Wednesday morning for our Thursday CSA members since we want your produce to be as fresh as possible.

The weather this past week has been very frustrating. We did not get as much rain as forecasted, which at this time of year is huge! It has also been unseasonably cool. The cool weather makes working outside enjoyable, but it has slowed down a lot of our crops. We had hoped that our cucumbers would take off this week, but instead they have slowed down considerably. They need the heat of a “normal” July. Keep your fingers crossed for warmer weather since tomatoes, peppers, watermelons, cucumbers, summer squashes, and melons all need heat to produce well. All of the plants are flowering like crazy, but they need the heat to go from flowers to fruits in a timely manner. We can deal with little rain since we have an irrigation system, but we have no way of mimicking the heat of a hot summer day.

Another week of garlic. We are again putting in the softneck variety Susanville. Earlier this morning we finally finished cleaning and grading the last of the Susanville. Some of them are a little damp because we had to take some of the outer wrappers off to get to a clean layer, so we have all of the bulbs laid out in a single layer in bread trays to allow them to dry out completely. We are still working on cleaning the rest of the garlic! It is going to take me awhile to get it all cleaned between our regular weekly chores and managing the rest of the farm. Usually I end up cleaning the garlic late in the evening when we are done working outside. I have listened to quite a few NOVA specials while cleaning your garlic.

Tyler spent part of last Friday building a platform for our drip tape winding machine so that it can be placed in the back of our truck. Last fall Don built a machine that winds used drip tape onto a reel so that the tapes can be reused. Most of the time, people use the tape for one year, but have no way of storing it, so they end up throwing it out or recycling it. It is fairly expensive stuff and we didn’t like the carbon footprint that is produced by replacing the tapes every year, so we decided that we wanted a way to reuse the tape. 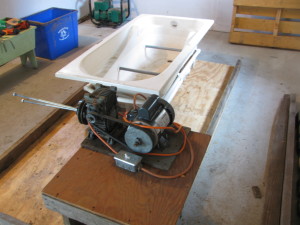 The problem with the original version was that it needed to be plugged in to a heavy duty outlet. This meant that we had pull the tapes out of the field into the bed of the truck and try to keep them from getting tangled. Then we would bring them back to the farm, unload them, untangle them, and then wind them up. It was very inefficient and because the tapes were bent and tangled they would have a tendency to crack. Once they cracked it totally defeated the purpose of saving the tapes since it creates giant leaks in the field. We wanted a way to make the unit mobile so that we can wind the tapes up directly from the field and be able to avoid all of the issues we discovered last fall.

Tyler used a sheet of 3/4 inch plywood that will slide into the bed of our truck to act as the platform from which we mounted the winder, the generator, and the bath tub. He built a crib to house the base of the winder since one of the biggest issues was the winder rocking uncontrollably as the reel became full.

Hopefully we will get a chance to try the unit out on Wednesday morning. The plan is that we will be able to wind up the tapes in areas where the direct seeded crops are done producing (like the turnips and arugula) and then be able to till those crops under. Once we do that we will be able to seed new plantings for the fall. If all goes well we can wind up the tapes, till, seed, and then unwind the tape again right away. We basically have to be able to irrigate immediately after direct seeding crops otherwise germination is terrible. It is even more important this year since the direct seeding is in our sandiest field. Wish us luck!