Home/Information/This Week on the Farm 7/31

We did get rain again last Wednesday night. We woke up all pumped that it had rained again, but when we looked out the kitchen window in the morning we saw that it wasn’t a good night for our burr oak tree. One of the larger limbs on the east side of the tree came down. Thankfully it was a fairly clean break and didn’t do a ton of damage to the trunk. It also didn’t land on the house, so that’s a positive.

The bean seeds we seeded last week have germinated already. The percent germination seems very high and some of the plants are already starting to put on their true leaves. With more rainfall we will hopefully have a better stand of beans this fall. We also have been thinking that the heat and lack of water not only impacted plant growth directly by stressing the plants, but also impacted the number of pollinators out doing their thing every day. With more average temps and a little more moisture, we have seen more bees out in the fields this week than we have the rest of the season combined. That is good news for a lot of our crops. 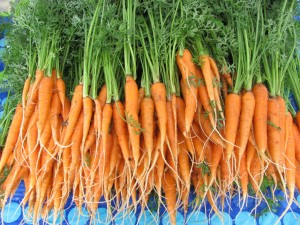 We are up to date on our fall planting schedule. We have planted cabbage, collards, and kohlrabi and next week the rush to get everything else in the ground begins. It is nice to have a definite schedule this year of when we need to get things in the ground. We learned our lesson last year that we needed to pay closer attention to the calendar to have fall peas, lettuce, and other greens in the later season boxes. It is even more important this year with the awful growing conditions we had for the first half of the season to make up for what will inevitably be reduced yield in a lot of crops.

In addition to the fall seeding, we finished weeding the cabbage field on Monday. We are really pleased with the way the parasitoid wasps we have been releasing have helped to control the imported cabbage moth problem. The moth population seems to be way down from last year and so far there is not significant damage to the cabbage family crops. We are definitely going to get the wasps again next year. Why buy “organic” chemicals when you can release insects that do the exact same thing? Especially when in the long run they are less expensive.

This morning we finished weeding the peppers and the other half of the tomatoes. The peppers are starting to produce here and there. In the next week or two we should start seeing enough to go in the boxes. Like everything else, the peppers seem to have shot up overnight with a little bit of rain.

We ordered more garlic seed to increase the number of varieties we grow to five. We added both a softneck and a hardneck. We won’t be able to put those varieties in the boxes for two or three seasons as we build up our seed supply, but it will be nice in the long run to be able to put garlic in the boxes throughout the season.

A quick note about the patty pan squash- If you received patty pan squash in your box this week, it is slightly to moderately larger than it is supposed to be. It took longer than we had anticipated to have the condenser unit and the wiring done on the cooler, so we had to leave the squash on the vines. They are still edible, just scoop out the seeds with a spoon if they have large seeds inside. Hopefully in the next couple of weeks we will work out the kinks in the system and be able to harvest them at peak size.