Home/Information/This Week on the Farm 7/8

I would like to thank all of our member’s who have sent in recipes so far this season. I really enjoy finding out what you have made with the produce we grow!

The weather did cooperate last week and the fields did start to dry out. Some areas are still very damp and smell like a sweaty sock, but overall the fields were dry enough we were able to get into the fields with the tractor to cultivate. Between Don and I we were able to cultivate the dry bean field, the green beans, sweet corn, winter and summer squash, melons, watermelons, peppers, tomatoes, and eggplant. 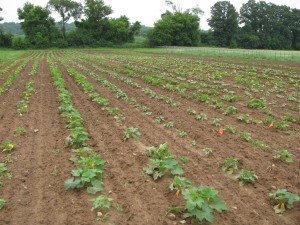 It was the last possible time that we could cultivate the winter/summer squash and melons/watermelons, so I am really happy that we were able to get that done. They are starting to vine pretty heavily, so after this week the only weeding we will be able to do in those fields is by hand.

There are plenty of other areas that need to be cultivated, but many of those are in areas where the drip tape was pulled out of alignment due to the storms two weeks ago. It took Tyler and one of our employees three backbreaking hours to put everything back in just one of the three fields where we have drip tape. This morning four of our employees placed the remaining drip tapes back where they belong. Since it rained again last night, we are going to have to wait one more day before we can cultivate in those fields, but we should be able to get into the fields tomorrow. 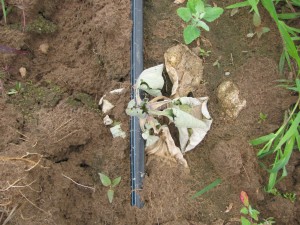 The full extent of the damage from the heavy rains is finally clear. There was a larger crop loss than we had hoped would be the case. Like I mentioned last week, this was mainly due to asphyxiation of the roots and not because of wash out. The most frustrating part of this is that the majority of the damage occurred in crops that would normally be harvestable right now. The napa cabbage, kohlrabi, broccoli, and head lettuce suffered the most damage. Those are the crops that we depend on to add variety during the transition period between early, cool season crops and warm season crops.

The good news is that the main season crops like tomatoes, peppers, squashes, onions, beans, etc. were not greatly damaged by the rains. These items will start appearing in your boxes over the next month or so as the heat of the summer does its work.

You may be overwhelmed by the amount of lettuce you have received this last month. This will most likely be the last week of multiple types of lettuce since the summer heat causes lettuce to bolt and become bitter. Enjoy those last big salads since it will be fall before you get this much lettuce again!