Home/Information/This Week on the Farm 8/14

Well, we are halfway through the season and we have not dropped below six items in each box. With the weather we had for the first third of the season that isn’t too bad. Although the boxes were smaller than last year, we did not need to cancel a box or try to buy produce from other farms, so that is a good thing. 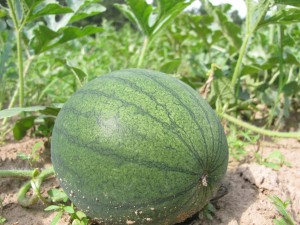 It is amazing to think that the weather we had in early June does impact what the crops will look like in September and October. Plants don’t put on size, so fruit set is delayed, or yield decreases because you lose plants from lack of water. When you are used to buying your food at the grocery store that connection is not as clear. The price may go up, but the produce is always there because they can ship it in from out of state/country.

The fall plantings are starting to germinate. The cabbage and kohlrabi look good and the turnips look fantastic. The kale is looking okay, but for some reason this year’s seed is not germinating very well. Our spring planting of kale also had very poor germination (that and getting wiped out by 40 mph winds and blowing sand). I think we are going to go with a different seed supplier next year for the kale.

For the next four or five weeks we have lists of more crops that will be planted for this fall. Many of the early season greens like arugula, spinach, and lettuce can be planted for a fall crop. With temps cooling off instead of getting warmer, the growth of these plants is slower in the fall than in the spring. This means fall plantings don’t recover as rapidly after being harvested, so you oftentimes don’t get as many harvests off of one planting as you do in the spring. It just means we have to plant more seed to have enough greens for everyone to enjoy them before the cold of winter takes away our ability to have fresh greens.

This week we weeded the older planting of beans for the third time this season. They are starting to have their second flush of beans. With the rain and the cooler temps the plants are producing more evenly, which is nice. Earlier this year we would have pockets of productivity and other areas where there would be nothing. Tyler and I both agree that we love the weather we have been having lately, and that means a lot since farmers always complain about the weather. 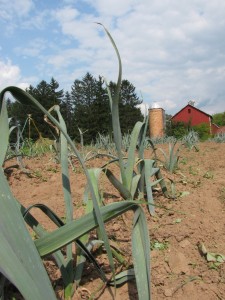 This morning Tyler and some of our workers were out weeding and hilling the leeks for the second time this season. Speaking of leeks, our third video for the Eat Local series is out. Check out our facebook page for a link to the video. The video turned out really well, and the recipe that Chef Matt Pace  gave looks really tasty.

We have gotten a couple of questions about when the tomatoes will start appearing in the boxes. The bad news is that it will be another couple of weeks. As you may recall, we had to destroy our first planting of tomatoes while they were still in the greenhouse because of an outbreak of bacterial spot. We didn’t get the second planting of tomatoes in the ground until the first part of July, about a month later than normal. The good news is that the tomato plants are looking really healthy and are starting to flower.