Home/Information/This Week on the Farm 8/18

We would like to thank everyone who contacted us about volunteering this past weekend. Unfortunately we had to unexpectedly cancel the event due to the fact that Tyler and I couldn’t be on the farm. Thank you so much for your interest and we hope to have more events next season where you can come out and see the farm. Remember that we have an open door policy, so any member can come out at any point and see the farm. Just give us a heads up that you will be coming so that we can plan on your arrival.

The weather has continued to be cool this past week. The forecast for this upcoming week shows multiple days in the mid 80s and one day above 90. With weather like that the tomatoes should start turning for next week. This week we had to pair tomatoes with cherry tomatoes and tomatillos so that we had enough for everyone to get something. All of the plants have a lot of fruit on them, they are just slow to mature. It is very frustrating!

Last week we were able to get a lot of weeding accomplished. We got all of the new direct seeding plantings hoed. Everything in that planting has germinated well. Based on the spring plantings and this last planting we need to adjust how we seed Swiss chard and beets. In past years we have used every other cup on our planter to seed these crops to make sure that the plantings were not incredibly dense and to not waste seed. In the past this worked fairly well. However, given how much seed we need to purchase now in order to get price breaks, “wasting” seed by over planting is not a problem. We need to increase the number of seeds per row so that we end up with better stands of each of these crops. This past week we seeded another block of beets using every cup to see if we can get a better stand of beets for this fall. 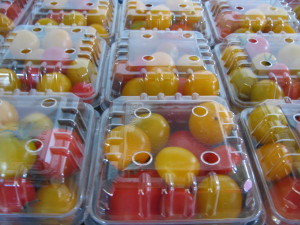 We also weeded in the tomatoes as we worked on trellising. When we harvested tomatillos last week we noticed that some of the trellised tomatoes were actually below the line of trellising that was supposed to be holding the plants up. It was like they were trapped below the line where they needed to be. This happened because we added the upper lines too early, when only some of the plants in the row were tall enough to be held up. We spent an hour or two going back through the plants and lifting them through the trellising to get them in the right spot. We try to limit the amount of contact we have with each plant, so having to go back through and lift every plant is not ideal. Now we know for next year to wait until all of the plants (or at least the vast majority) are tall enough to add the next line of trellising.

Last year we tried to jam as many plants into one field as possible. Our thinking being that the more plants we planted the more squash we would have. This meant more plants per square foot, so when powdery mildew showed up (as it does every year) it was able to spread rapidly from plant to plant. This year we spaced out our plants both in row and between rows. This should help slow down the spread of powdery mildew. Also, from the research that we did last winter, it should mean more fruit per plant since each plant is not competing as heavily for resources.

We have noticed a big difference in the number of fruits on the delicata plants. Each plant has at least two decent sized fruit already, a couple of small fruits, and some of them are still flowering. The acorn squash are also continuing to fruit. So that is one successful implementation of a lesson learned from last year!

For those of you who have wondered why your purple beans turn green when they are cooked, here is the answer. The pigment that gives the purple color is called anthocyanin. Anthocyanins are water soluble, so when you cook the beans the color fades. To try to preserve some of the color you can lightly blanch the beans and then dip them  immediately in cold water. But the best way to enjoy the color is to eat them raw. 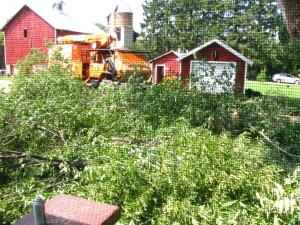 In other news, this Monday we had multiple trees trimmed here on the farm, including our mascot, the burr oak. The drought in 2012 took a toll on the burr oak. We lost three major branches in the last two year and we needed to have those limbs cleaned up. Luckily, one of our CSA members owns a tree trimming business so he was able to come and help us out. All of the wood will help us heat our house this winter and all of the brush got chipped up and spread in a low area near our greenhouses where we had a giant rock pulled earlier this year. The whole farm looks a lot different now!