Home/Information/This Week on the Farm 8/19

The weather has been very nice this week. It has been warm, dry, and a little breezy. The breeze has kept the mosquitoes at bay, making working conditions much more enjoyable.

It was another busy week of weeding, planting, and mowing. The cabbage field is coming along nicely. The first half of the field is completely weeded. The second half still needs some work. The area in the shade near one of the fence lines has lamb’s quarters that are over my head. These are difficult to pull because of the thick root system, but they have to be pulled by hand since the string mower, even with the heavy duty strings, can’t handle the thick stems.

Tuesday night, Tyler and I went to Columbus to buy more crop cover seed. We chose a winter rye to plant in areas where we have pulled out plants that are done producing. Next spring the rye will be tilled under. As it breaks down it provides a lot of the nutrients that next year’s plants will need. Winter rye is a type of green manure, as opposed to a brown manure which comes from animal sources. 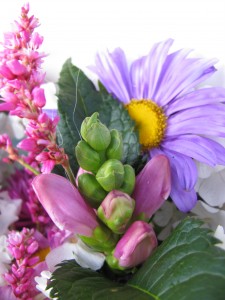 Several of the raspberry plants we planted this spring have a couple berries on them. One of the varieties has smaller fruits, and the other has fruit the size of a large thimble. Only three out of our twenty-five bare root plants did start growing. We have to return those three plants by October in order to get replacement plants.

In other news, the pumpkins are orange already! Normally pumpkins would still be green or just starting to turn orange at the end of August. In general pumpkins are started by planting seed directly into the field. We were so excited to get our pumpkin seeds this spring and we wanted to make sure we got high germination rates, so we started the seed in the greenhouse and then planted the plugs in the field a couple of weeks later. This was a mistake. The plants matured much more rapidly by starting them in the greenhouse and they started flowering much earlier than normal. This led to early fruit set, resulting in pumpkins that are almost ready to harvest. Thankfully pumpkins keep well in the field if they are still on the vine so we can hold them in the field until it is time for pumpkins.

The tomatoes are looking good. We have had a couple ripen over the last week, not enough to put in the boxes, so we ate them. They were delicious. Starting next week we should have tomatoes in your boxes.

If you are interested in helping out with harvesting and packing one Thursday this fall please let us know! E-mail kate@burroakgardens.com