Home/Information/This Week on the Farm 8/27

It is hot! Really hot! The past few days have seen heat advisories that last all day here on the farm. It makes working outside pretty terrible, but Tyler and all of our help have soldiered on and still managed to get things done. I am looking forward to later in the week when the temperatures drop into the 80ºs again. 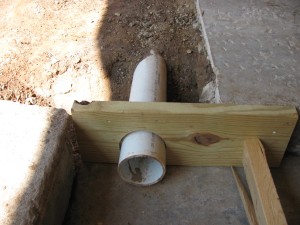 Well the concrete is in and it looks fantastic! The crew spent about five hours here last Friday, setting up the forms and pouring the concrete. The biggest question we had was how they were going to get the concrete into the barn. The side door has the easiest access, but there are still raised sections of old concrete that we would have had to build ramps up and over. The south wall is exposed, but there was no way a cement truck would make it around the greenhouses and not take the LP tank out. Don came up with the idea of dropping the concrete through an old trap door that was used to drop hay down to the cattle stanchions. 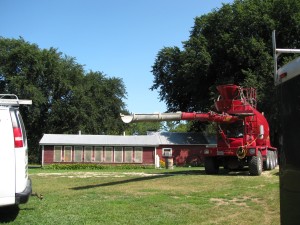 Once the forms were in place and the cement truck arrived they pulled right up to the big door and placed the chute over the trap door. Down on the lower level they had a wheelbarrow that they used to transport the concrete to all of the various nooks and crannies that needed to be filled. Tyler helped out by running the chute up top and there was only one minor snafu where the concrete started to get too dry in the chute. Once that was figured out, it went very smoothly.

There were three main sections of the barn that needed to have cement poured. The first was one of the old gutters that we did not incorporate into our drainage system. We wanted to fill it in so that it reduced the chances of tripping while we work in the barn. The east side of the gutter is slightly higher than the other sides, so they graded the concrete down to match the lower portions. It is only a slight incline, but we are planning on spray painting yellow caution lines once the cement is dry so that people who are carrying boxes of veggies aren’t caught off guard by the slope.

Along the west wall of the barn there was a section where roots from outside had grown up underneath the concrete and caused it to buckle. We ripped that section out last week and that has now been filled in and graded so that any water will slope into the gutter system. 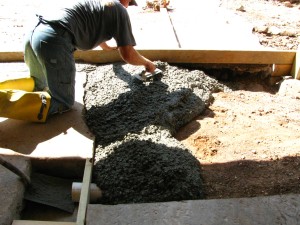 The third area was the main section that we needed to have filled. This is where there used to be troughs for the dairy cattle and where we plan on putting the sinks and washing lines. It is also part of the pad that now makes up the footing for the south wall. In the next week or two we will hopefully have time to start construction on the south wall to get the area enclosed.

As soon as the area is enclosed and we put the ceiling up, we will be able to use the area to wash and pack the veggies each week. It will also be a nice work area where we can process dried beans, or next year work on processing crops like garlic or bagging potatoes.

In other news, we only have one more variety of potatoes to dig. We might have time on Thursday to dig some of them, which would be wonderful since that is the last day that our summer helpers will be here. They have helped us out so much this summer and we would like to thank them for all of their help and for getting up for all of the early morning harvesting and packing days.

We would like to thank Lapacek’s Orchard for offering the apple share again this year and hope that all of you who signed up for an apple share enjoy your first week of apples this week.