Home/Information/This Week on the Farm 8/4

Our drip tape winder worked like a dream! By mounting the winder in the bed of the truck it took away all of the violent twisting that the reel would do when it started to get full. The one improvement that we need to make is to use a larger generator. When the reel starts to get full, the engine struggles a little to keep up. Since we are borrowing a generator right now, this is not a huge deal, but we now know what size of a generator that we will need to purchase in the future.

We were able to wind up about a quarter of a field of drip tape in about an hour and a half. It would have taken us several days to do a similar amount the way we had done it in the past. This is going to make a huge difference this fall when we have three and a half fields of drip tape to wind up. Plus the tapes that we rolled up were in perfect condition since they went directly onto a roll and weren’t folded and tangled in the bed of the truck. We are going to need to make a dozen or so new reels to be able to wind up the tapes that are currently in the field. The reels that the tapes come on are made out of cardboard and are not durable enough to reuse. Don found out that by taking the inner cardboard tube that the tapes initially come on and mounting it to plywood circles he could make reels that are reusable from year to year.

As soon as we had the tapes wound up, Tyler caught up on all of our direct seeding to this point in the season. He planted carrots, cabbage, chard, turnips, and dill. We were able to unwind all of the drip tapes we had just wound up on the new plantings and water them in right away. We are hoping that since we irrigated them right away and then got a couple of days of nice rain that they will germinate well and we will have nice fall plantings of those crops.

I personally love fall plantings of crops, both transplants and direct seeded. It is so much easier to keep up with the weeds and usually all you have to do is weed it once and it is set for the season. We have had trouble this year keeping up with the weeds in the direct seeded field because that field always seems to get pushed to the end of our ever expanding to do list. We are hoping that by building more of the low wheel cultivators that Tyler trialled this year we will be able to zip through the direct seeded field much more efficiently next year. Another lesson among many learned this year.

It looks like we may have one or two pepper varieties ready next week as well as some tomatillos. This cool summer is really slowing down the warm season crops. By this time last year our first tomatoes were starting to turn red. The way things are developing  it looks like another two weeks before the tomatoes are ready. The plants are looking fantastic and our trellising system is working really well. Our modified “Florida Weave” was too loose to hold the plants up on their own, but with the addition of two twist ties in between the posts to hold the tomato twine in place, the trellising seems to be holding up. On all of our trellising we have at least two lines run, and in some places the plants are ready for the fourth line! 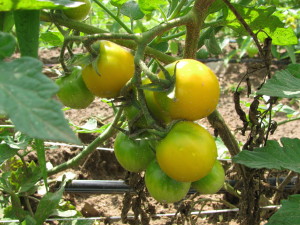 This year we only trellised the indeterminate varieties of tomatoes. Next year I want to trellis all of the tomatoes. It makes fertilizing, weeding, and scouting for insects much easier since the plants are up off of the ground. I figured this last part out last week when we found some Colorado Potato Beetles eating on the tomatoes. Thursday afternoon and Friday morning we went through and picked them off by hand and put them in buckets of soapy water. The soapy water is used to hold them in the bucket so they can’t crawl out as you are scouting for more insects. I want to go through one more time in the next couple of days to catch them before they lay eggs. I need it to dry out before I go in through the tomatoes because I don’t want to accidentally spread disease. We got an email last week that one strain of late blight has been found in Portage County. Although that is some distance from us, it does show that conditions have been favorable for that disease this year, so we are being extra vigilant in our cultural controls for plant pathogens. 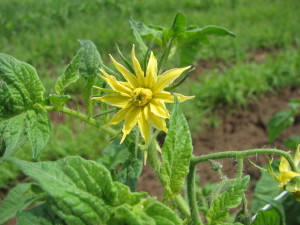 I am keeping my fingers crossed for warmer temperatures. Other than the tomatoes, the crop that seems to be impacted the most by the cool temperatures has been the cucumbers. I am hoping that with warmer weather we will be able to put cucumbers in everyones boxes and not just in some. I also want to try trellising our cucumbers next year. I think that will help us be able to keep the weeds under better control by not having to do everything by hand. The cucumbers vine so heavily that our aisles are gone and we have to weed everything by hand. The more that we work with trellising, the more I am in favor of it. It just makes it so much easier on your back!

Don’t forget that this Saturday is our Farm Fiesta. It starts at 2PM and we will have a potluck, farm tour, and campfire. Last year’s Farm Fiesta was awesome because the food was incredible! Last week’s recipe for Remy’s Ratatouille was one of the dishes at last year’s Farm Feista. Remember to RSVP by Friday so that I know how many people will be coming!