Home/Information/This Week on the Farm 8/7

It has been another busy week on the farm. Our cooler is up and running and we finally have a light inside so we can see where we are going. On Saturday we went and bought a vinyl remnant to put over the plywood floor. Since we are in the process of becoming certified organic, we can’t use treated lumber anywhere near our plants or harvested veggies. This means that we needed to cover the untreated plywood to protect it from any moisture that might condense in the cooler. It will also make it easier to clean up any spills or soil tracked in from the fields. Hopefully this weekend we will have time to cut the vinyl to size and install it. 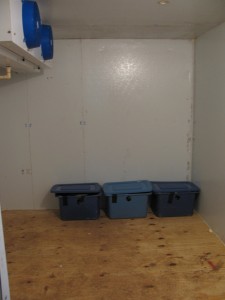 We still need to come up with some sort of shelving in the cooler, but so far I am not sure what the best option is going to be. We want something that cleans up really easily to help with food safety concerns, but it also needs to be very strong to support heavy boxes of veggies like cucumbers or cabbages. If you have any suggestions of brands/types of shelving units that work, or what to avoid, let us know. We are always grateful for advice.

Last Friday we pulled hoses and sprinklers from two of our fields. The potato field doesn’t need irrigation any more since many of the plants are done growing. Four out of the five varieties have died back, but the French Fingerlings are still going strong. I think that is a definite point in that variety’s favor that it can handle as much stress as we have seen this season and still be growing.

The other field that we pulled the irrigation from was our direct seeded field. Most of the plants were done producing in June (spinach, radishes, etc.) or germinated really poorly (kale, swiss chard, and two out of the three plantings of beets), so we can till them under to make room for fall plantings. Now that the irrigation equipment is out of the way we can go ahead and prep the field for planting.

We also took down the garlic that was hanging in the barn on Friday. The seed garlic was fully cured, so we cleaned it up and brought it into the house to store until this fall. We ended up having enough garlic to go in the CSA boxes this week after sorting out the seed garlic and the bulbs that were super tiny. We are going to try to make minced garlic with the really small bulbs this weekend so that it doesn’t go to waste.

Saturday Tyler released the paristoid wasps out in the cabbage field. They help keep the imported cabbage moth population down to a manageable level. The wasps come on little black cards and are so tiny you can barely perceive movement on the card. While he was out doing that, I finished weeding the one planting of beets that actually germinated. The beets look pretty good, but like everything else, they are starting to need water again. 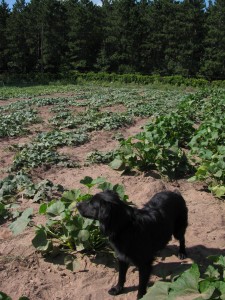 This week we weeded the cucumbers and the melons again. We also got three rows of patty pan squash weeded, which if you had seen the rows beforehand, you would be very impressed! We have decided we need to buy a couple more potato forks to help weed in areas where there is a lot of tall grass. It makes it so much easier to weed when you have the right tool for the job.

Check out our facebook page for information on the Apple-azing Race put on by Lapacek’s Orchard and the Farm Stop & Barley Pop tour. Both events are coming up in September and will be tons of fun! Also, stay tuned for information on our harvest potluck that will be happening on September 23.