Home/Information/This Week on the Farm 9/20

It has been a very eventful week since we wrote the last newsletter. Last Wednesday on his way to Madison the front left wheel on the delivery truck broke on Tyler as he was driving out of a gas station parking lot. Instead of being perpendicular to the ground like it’s supposed to be, the tire was at an acute angle to the ground and rubbing on the wheel-well of the truck. Thankfully his uncle was here at the farm and was able to drive our other truck down to swap the totes and Tyler was able to deliver the vegetables. 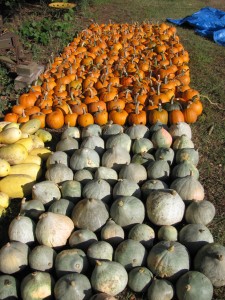 Thursday for our Appleton and Neenah deliveries we secured a replacement vehicle from another one of Tyler’s uncles. Everything was looking great until we loaded the vehicle and it wouldn’t start. We had to move half of the totes and coolers into another truck and find someone else who was willing to let us drive their truck so we could deliver the rest of the vegetables. Thanks to Dave Carlson everyone at J.J. Keller was able to get their vegetables. We again apologize for the inconvenience this may have caused you.  Believe us when we say we hope this never happens again!

Onto crop news. Last Wednesday night we did have some frost. Starting at midnight Tyler and I alternated getting up every hour to check the temperature since there was a frost advisory. At around 4:30 am we were out in the field because the temperature was getting close to freezing. At 5:30 am we turned the sprinklers on the tomatoes and peppers.

Irrigating is a very effective means of frost protection because as water freezes it actually releases heat. This heat is enough to keep the plant tissues above freezing and prevents cellular death. The one flaw in this system is that as soon as you stop irrigating and the temperature is still below freezing, the plant will freeze. You have to be very careful not to run out of water or have blockages in the line that prevents water from leaving the  sprinkler head.

We ran the sprinklers until 8 am on Thursday morning. At that point the temperature was far enough above freezing that none of the water we had applied would freeze. The tomato and pepper plants made it through without any damage. 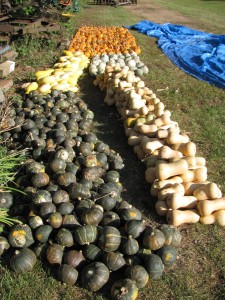 Thursday night we were out in the field at 2:00 am because the temperatures were dropping faster than the night before. Right as we were about to start irrigating the clouds rolled in and the temperature started slowly increasing. By 6:15 am it was over 35˚F so we felt safe enough coming inside and going back to bed.

The only crops that seem to have suffered some damage from Wednesday night’s frost were the winter squash and gourds. The butternut squash seemed to be hit the hardest of any of the edible squash, although the bottle neck gourds suffered the most out of any of the cucurbits.

The squash are still edible when they have a little frost damage, but they will not store as well. If you have a squash with discoloration or a shiny water-soaked look you should eat it within a week or so.

We ended up harvesting most of the pie pumpkins and squash Thursday afternoon because we were afraid of the chance of frost that night. Since most of the vines were dead already it doesn’t make a difference if they are stored out in the field or in the farm yard as far as taste, but it does make frost protection easier if they are harvested. Now all we need to do is throw a tarp over the squash if it might freeze and we will be okay.