Home/Information/This Week on the Farm 9/24

It is week fifteen, which means we are three quarters of the way through the 2013 season. Five more boxes of delicious vegetables to go! If I had to describe this season compared to past years I would say that this has been the year of the green bean.

We have been very lucky that there hasn’t been an early frost. So far Tyler and I have only had one night where we woke up every couple of hours to check the temperature. As the weather cools off and daily temperatures stay well below 80º F, all of the warm season crops like tomatoes and peppers will start to disappear from your box. Cool season crops like turnips, radishes, and lettuce will make their appearance again. That is one of the things I like about living and farming in Wisconsin. There seems to be a nice symmetry to the season.

This past week we got three and a half inches of rain in one day. Since the fields are messier right now and there isn’t as much bare soil, we didn’t have any problems with washout. Because of that, Tyler and I are very hopeful that a grass waterway will do the trick if we have another wet spring like this year.

This past Friday Tyler and one of our workers spent the day building tables in the east barn in preparation for our squash harvest. We had the basic frames and legs already assembled, but the original design was meant for flats of plants in a greenhouse setting. We needed to reinforce the center of each of the tables so that it could handle the weight of a table full of winter squash. We ripped a couple of the tables apart and used the runners to reinforce the remaining tables.

Once the structure of the table was sturdy enough, we covered the tops with lath. After messing around with a hammer and nails, Tyler remembered that we have an air nailer. This sped up the process significantly and we were able to get all of our big tables built. 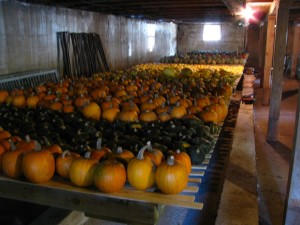 Saturday was our squash harvest. We would like to thank the Connaughty family for coming out and helping us pick squash. We were not overly pleased with how the squash harvest turned out this year. The combination of no rain in August when they were putting on size and an early outbreak of powdery mildew resulted in small squashes and pie pumpkins. We will have squash in the boxes, probably for the last four weeks, we were just hoping to be able to put squash in your boxes more frequently this fall.

The crops we seeded for this fall are starting to take off. The pac choy and turnips in your box this week were seeded in the middle of the summer. We tried another variety of kohlrabi, but the germination rate was very poor so we had to pair it with another item this week to have enough to go around. We like how it matured more rapidly than the variety we grew this spring, however, I think that we will probably have to try transplanting if we try growing it again instead of direct seeding. Germination rates are always higher in the controlled environment of the greenhouse. 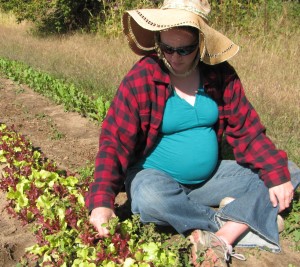 Even though it is now officially Fall, we are still out weeding crops. I spent over an hour in the loose leaf lettuce yesterday pulling weeds, and I plan on going out again this afternoon. There is a much greater sense of satisfaction when you weed in the fall because you know that you won’t have to weed the same area in another couple of weeks! I only wish that I was more mobile so that I could move down the row a little more gracefully.

Before the season ends, we want to thank Tyler’s mother for taking charge of washing all of the blue totes this season. Between the harvesting totes and the delivery totes, every week she washes over two hundred totes! Each tote and lid goes through a soap/scrub bucket, a rinse bucket, a water/bleach bucket, and then is rinsed with a hose and set out to dry. It is a lot of work and as the weather gets colder, it starts to become even more work as your hands are in and out of the water.