Home/Information/This Week on the Farm 9/25

Well the frost hit twice this week. Saturday night was supposed to be close to freezing, so we were up every hour starting at midnight to check the temperatures. The temperatures didn’t drop as quickly as we expected and we didn’t have to go outside until 4:30am when it was about 34°F. We turned the sprinklers on at 5am and they ran until about 8:30am when the temperatures climbed back above freezing.

Sunday night was not supposed to get as cold so we didn’t plan on checking temps until about 3am. Luckily Tyler checked around 1:30am and the temp was a lot closer to 32°F than expected. We ended up going out and starting up the irrigation on the peppers and eggplant at 2am. Tyler hauled 5 or 6 loads of water out to our far field from about 2:30am until 8:30am. Because we were able to keep applying water to the plants none of the plants froze and there was no damage to the peppers and eggplant. We are still pretty tired though. 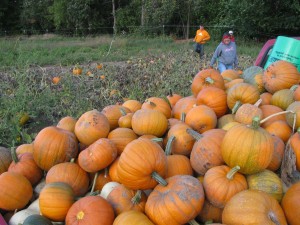 This week has been all about harvesting and storage. On Friday we went to a greenhouse near Pardeeville that had a lot of tables for sale. They are 3’x8’ or 6’x8’ wood frames on 2-3’ galvanized steel legs. We were able to get them for less than half of the cost they originally paid. We are going to put lathe over the tops of the frames to create a table top and then use them to store things like squash, potatoes, onions, etc. in the barn instead of outside under the pines. This will help us keep the veggies longer and we won’t have to worry about going out and covering them with a tarp when it is supposed to freeze at night. 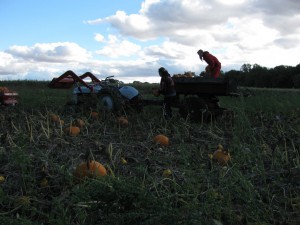 Saturday night we had a crew out to help us harvest all of the squash and pumpkins. The Jack O’ Lantern pumpkins are out by the road for sale, but everything else is still in the truck, in one of our hoophouses, or in the basement of one of the barns. We put the Butternut squash in the hoophouse because a lot of it is not ripe yet. You can ripen squash off of the vine if you leave it in the sun. Since it is in the hoophouse, we can close the sides at night to protect it from the frost, while at the same time exposing it to light. We are going to do the same thing for the spaghetti squash once we get a chance to unload it from the truck. Given how bad the growing season was, we are pretty excited at how well the squashes produced.

This may be the last week of beans depending on the weather. I feel like I keep saying that, but at some point the plants are not going to be able to protect the beans from the cold nights. We changed our harvest method this week. Instead of picking the beans in the field, we pulled the entire plant and brought a truck load of plants up by the house. We could sit at a table and pull the beans off. It was much easier on our backs and didn’t take as long to harvest the beans. The downside is that the plant can’t produce anymore beans, but at this stage in the season that wasn’t very likely anyway. 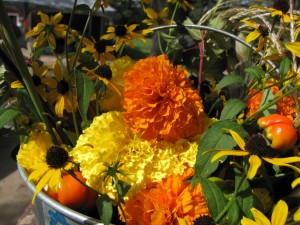 This is the last week for the flower share! For those of you who got a flower share this season we would like to thank you and we hope you enjoyed the fresh flowers as much as we did!