Home/Information/This Week on the Farm 9/3

We have hit the point in the season where our summer work crew is back to school. This means less help on Mondays and Tuesdays and more work for Tyler. Mondays we are still able to work on projects like seeding, weeding, field clean up, etc. Tuesdays from now until the end of the season are most likely going to be taken up with harvesting activities.

I can tell that fall is just around the corner because we busted out the sweatshirts for the first time yesterday morning. Thankfully there is no sign of a super early frost in the forecast, but I have been obsessively checking the ten day forecast both for the nightly low temperatures and for chances of rain. It has been two weeks since we had a decent/any rain, so we have been running the irrigation a lot in the last couple of weeks. Like last year, it seems like any rain clouds push off to the north or south of us.

Last Thursday was the last day our summer crew was all here and we had them help start to set up the overhead irrigation system in the pepper and tomato field. We use this system to protect against frost. If it is going to get down close to freezing at night we start running the overhead sprinklers. As water turns to ice it releases heat. If the phase change from liquid to solid occurs on the plant tissue it actually keeps that tissue above freezing. So as long as you keep irrigating and more heat is released you can keep the plant tissue from being damaged by the cold weather.

This system only works down to 26º or 27º F and won’t work for an entire night because of the build up of the ice layer on the plant. We have had luck running the system for about six hours, or from 2am until 8am when the sun comes up and the temperatures climb to above 34º or 35º F. In that amount of time the ice layer doesn’t build up too much to prevent the heat transfer to the plant tissue, or become heavy enough that it snaps branches. It does mean getting out of the truck every twenty minutes or so and checking to make sure that the sprinklers haven’t iced up or sprung a leak. Needless to say, it is one of the worst jobs all season that needs to get done.

We have one more round of direct seeding to do for fall and we will be done seeding for the year. The last planting includes arugula, radishes, a few types of mustard greens, and pac choy. Tyler got the area tilled and prepped already and we will seed and set up the drip irrigation on Friday. It still amazes me that some plants grow so quickly that we can seed them outside in September and they will be ready to harvest in October.

Yesterday while Tyler was tilling I went down and checked on some of the smaller onions that we set aside the past couple of weeks on harvest days. We have them curing in the basement of the east barn on our new tables. I pulled half a dozen that had started to sprout (almost all of them were oddly shaped to begin with so I wondered if there was a correlation) and probably two or three that were soft. Other than that they are all curing really nicely. We haven’t decided what to do with these smaller onions yet. I think that once we get the red and yellow globe onions in from the fields and we get a chance to sort out the smaller onions, we may put a mix of the smaller onions in your box in late October. But if there is one thing I have learned from farming, never look too far into the future. 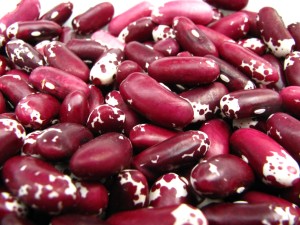 Half of the dried bean field is ready to be harvested. We planted an acre of dried beans. Half an acre are Jacob’s Cattle beans and half an acre are Black Turtle beans. The Jacob’s Cattle have a shorter day length and are the first to be ready for harvest. I am really excited about our new tool to process the beans, but I am going to wait to write about it until I have pictures of it in action. Hopefully next week or the week after you will have a lengthy description of my new favorite farm tool, so stay tuned! 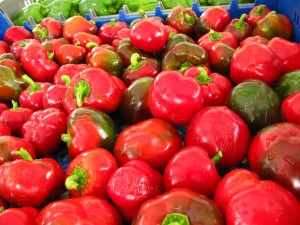 The peppers have really started to take off and more varieties are finally mature. We have several types of specialty peppers this year. Some of you will have gotten the Topepo Rosso pepper last week/this week. This pepper looks like a tomato and is sweet. We also have two types of bull’s horns peppers. The Carmen is a sweet pepper and the Highlander has heat similar to a medium salsa. Unfortunately there is very little that can be used to distinguish between the two varieties. I recommend taking a very tiny piece off of the tip of the pepper and tasting that before you bite into the pepper whole hog, or put it in a recipe. That way you will know what you are getting into!!

I am very pleased with how the cherry tomatoes and the saladette tomatoes have produced this year. The saladette variety is called Indigo Rose, and I think the purple color adds a lot to dishes. The Mountain Princess slicer tomato seems to produce a smaller number of tomatoes, but a higher percentage of blemish free tomatoes than the Moskvich. These are all things that we take note of so that we can make decisions for next year on what to grow. We still have a couple of varieties of tomatoes that will be starting to ripen in the next couple of weeks, so I am looking forward to seeing how they compare based on taste, cracking, storage life, etc..