Home/Information/This Week on the Farm 10/1

We actually were off farm for a significant portion of last week, something that very rarely happens during the growing season. We took a road trip up to Ironwood, Michigan to attend the wedding of one of Tyler’s high school classmates. The drive was beautiful with all of the fall colors and I saw Lake Superior for the first time. 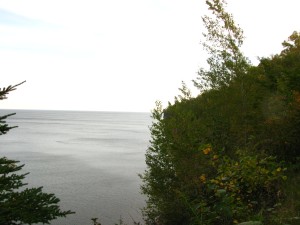 As a farmer it is amazing how even when you are away from your farm, you are still looking at crops and equipment to see if you can pick up any useful information. In the central sands region we saw huge farms harvesting gigantic potatoes into semi trailers, the result of massive irrigation systems and intensive fertilizer/pesticide applications. Seeing that process did make me wish that we had a larger tractor and newer potato digger, but given the scale of our production, the tools we have are appropriate.

We passed several equipment auctions, which we didn’t stop at since we didn’t have a truck and trailer to haul purchases home. We also passed a lot of farm stands and other shops that were showcasing all of the different types of ornamental pumpkins and squashes that people can use to decorate for Fall. There were quite a few varieties that I now want to grow, but since they are not edible and we don’t grow for wholesale or farmer’s markets, it seems like a waste to use the land for that purpose.

I think the biggest take away from the weekend from a farming perspective was visiting the grocery store. Given that we grow our own produce, Tyler and I very rarely make it to a grocery store during the growing season, and when we do go, we generally bypass the produce department. On this trip we stopped at a Copps and since I wanted to pick up some grapes, we poked around the produce section. The biggest surprise was how different the “vine ripened” tomatoes felt in your hand compared to what an actually ripe tomato feels like. They were hard, more like an apple than a tomato!

I guess that shouldn’t surprise me, given that even “vine-ripened” tomatoes are picked green and then, in many cases, sprayed with ethylene during the transportation stage to turn the fruit red. This process gives fruit that doesn’t bruise during transport and that has a much longer shelf life than if the fruit was actually picked when it is mature (like how we harvest on our farm). I would much rather have a tomato that had a shorter shelf life but that actually tasted like a tomato, than one that looks gorgeous on the counter for a week and a half but that tastes like cardboard! 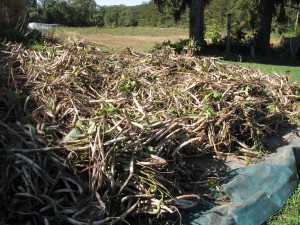 We made the decision to buy a pull behind combine in order to harvest and process dried beans in the future. Tyler found an Allis Chalmers model 66 combine, also known as the “All Crop Harvester” on craigslist. We drove out to take a look at it yesterday, and we decided to take the plunge and buy it. It is now the largest piece of equipment that we own. Since it was buried pretty deeply in the owner’s machine shed, we will pick it up later this week and I will post photos once we get it home.

I am keeping my fingers crossed that we will get it home and it will be able to be used right away, but given all of the moving parts, it may be next year before we are able to use it. Even if we do get it working, the growth habit of the Jacob’s Cattle bean is such that I don’t think the combine would be able to harvest it. The Black Turtle beans, however, are much more upright and I think we will be able harvest them easily with the combine.

It’s the last week for the flower share, so a big thank you is in order for Kit Schmidt!!!