Home/Information/This Week on the Farm 1/9

We would like to send out a big thank you to all of the people who have already sent in their shares for this coming summer. Money early in the year allows us to purchase seed, media, building supplies, and equipment when we need them. There are still plenty of shares available though, so don’t worry if you haven’t gotten your paperwork in. 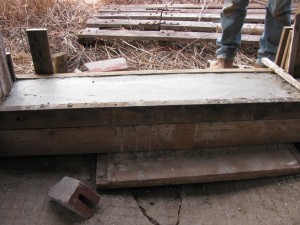 We finished the demolition in the basement of the west barn for our potting shed project. On Thursday we pored concrete since it was in the upper 40s. We had to repair a break in the south wall and level the surface to be able to build a wall across the opening. The form we built was cobbled together from a lot of old scrap wood with shims and other small pieces blocking up holes. We placed a piece of two inch conduit through the bottom of the mold to allow us to wash the floor and have drainage out of the room. It took a lot longer to cure than it would if we had pored in the summer, but it did finally set. 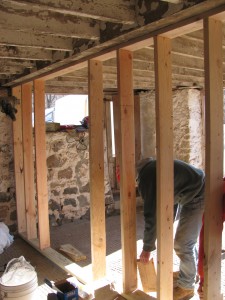 This weekend we started to build the walls. We started with the northern wall since it is the most uneven surface and we thought it would be the most difficult. We had to build the wall in three sections to be able to go up and over a raised section of concrete. The top 2×6 that ties the studs in place is in one large section to help give the wall strength and the bottom is tied into the floor with concrete anchors.

The west wall was the easiest to build since it was in one piece. We added a 6×6 post on the south wall to help strengthen the load bearing post that is already there. The original post is showing some signs of aging so we wanted to reinforce the post since there is a lot of weight above the new room. 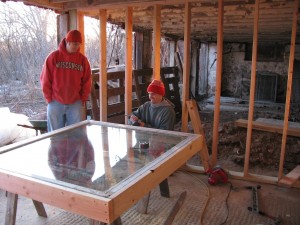 Sunday we framed out the south wall. We are using a large picture window that was being stored up in the east barn. It is huge! Then we bought two more single hung windows to flank the big window. Almost all of the south wall is going to be windows, which will be awesome since we can utilize natural light. Today we will hopefully put the wall up and get the windows installed. Hopefully we will have time to put the sheeting up on the exterior of the walls. We would like to get everything enclosed by Thursday when the temperature is supposed to drop into the 20s.

In other news, seeds are starting to arrive in the mail! Sometime later this week we will put together our optimal seeding schedule. I say optimal since it is always hard to stick to the schedule, especially with direct seeded stuff that is dependent on the weather cooperating. After two years of farming we have a good idea of when we need to start seeds in our greenhouse.

If you have had any difficulty getting the sign-up sheet to download, try again. I changed the file from a word document to a pdf, so those of you who use wordperfect should be able to read the file now. Thanks!