Home/Information/This Week on the Farm 2/15

The potting shed’s interior is almost completely done now. Tyler has to finish the trim around the east window, but everything else is completed. I think we learned that we will never buy the type of paneling we installed ever again. There is too little structure in the board which led to some sagging when we put it on the ceiling. It isn’t terrible in a potting shed, but it isn’t perfect. 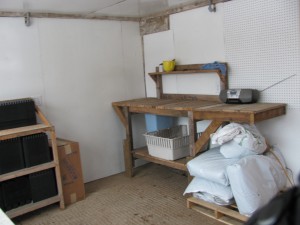 We moved furniture down yesterday. Tyler’s mom loves to garden, so several year’s ago he made her a potting bench out of scrap lumber. Since hobby gardening is a little less intensive we modified the original bench and added bench extenders on either side of the main bench. Now it will be able to handle the days when we seed twenty flats at a time. We also raised the bench up about 5 to 6 inches. Hopefully that means I won’t be hunched over for long periods of time while I fill flats with media. We have two complete seasons of farming under our belts, and already we can feel it on our bodies. Anything that we can do to better the ergonomics of a chore the better. 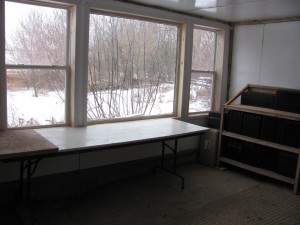 We also moved down a shelving unit that Tyler had built for his dad as a place to harden flats off before they go outside. He built the original version so well that it kept the heat in better than the greenhouse did and it actually killed the plants that were supposed to be getting used to cooler weather. We took off all of the plastic and are now using it as a place to store all of the different plastics we use to start seedlings. I think it looks pretty impressive. 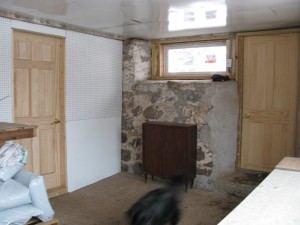 We still need to install the furnace, but the room actually heats up really well when the sun is shining. So much so that we probably won’t have to run the furnace on sunny days. All of the photos on today’s update were taken around 4:30 on a cloudy day. You can see how much light there is even when there is no sun.

This afternoon we are going to plant the onions and the first round of scallions. It took longer to get all of the furniture moved down to the potting shed than we thought it would. Partly this was because we had to take the trim off of the doorway to the chicken coop in order to get the potting bench out, and partly since we had to add bench space to the potting bench.

Tonight we are going to check out another 2-row cultivator. We already have two cultivators, but by adding a third we can have each of them set for different tasks. It is a huge pain to move the shanks on the cultivator to different widths or change the shoes from points (used to weed between rows) and triangular shoes (used to hill). Since we aren’t adding land this year, we have to be able to plant things like swiss chard, beets, lettuce, etc. closer together in order to maximize space. With a third cultivator we can place the shanks closer together to weed between narrower rows and not have to waste valuable time adjusting the shoes or shanks.

Hopefully by next week’s update you will see photos of the first seedlings of the year! Here’s to good germination!