Home/Information/This Week on the Farm 3/30

The sun has finally started shining and we have been super productive this week. Thanks to David & Kate Carlson who stopped out on Monday we planted all of this week’s seed in one afternoon. We seeded jalapeños, broccoli, lettuce, and cabbage. Almost all of the trays that had been in the germination greenhouse were moved to the hoophouse to make room. It was great to have help, not only because there were a lot of seeds, but also because it made the time fly by. 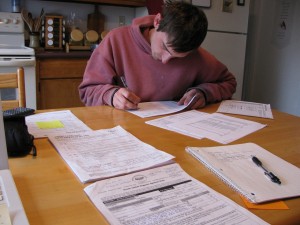 The end of last week we finished all of our paperwork for MOSA so we can be certified as “In Transition” to become certified organic. We need one more slip of paper from the company that we are getting our crop cover from stating that the seed is untreated and not genetically modified and a water sample from each of the wells that we use here at the farm. When we finished the paperwork we didn’t have the second well up and running so that was the first project on the list of things to do over the weekend. 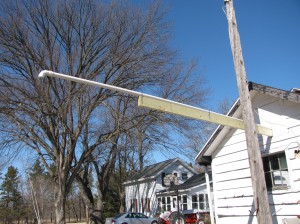 Saturday we spent the day getting the well up and running. We ran pipe up through the attic of the shop were the well is located and out through the side of the building. We added a 90° elbow at the end of the pipe. This will eventually have a length of hose attached to it so we can fill the bulk tank from it. Once we get the running gear and rig it so the bulk tank is secured, we can top fill the tank and tow it to our new field. From there we can fill the more permanent bulk tank from which we can irrigate the fields. 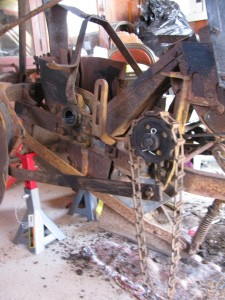 On Sunday we pulled the potato planter apart to try to fix it. Last fall we bought a potato harvester from a man up near Wausau. He also had a potato planter sitting in the yard and we decided to buy it too and see if we could get it working. After cleaning years and years worth of grease and grime off of it we did find a label for the manufacturer. Turns out it is a Hoover. Hoover produced one-row potato harvesters starting in 1916 until they were bought by John Deere in 1926. So our planter was made sometime between those two dates. Currently it is still in pieces in the shop, more pressing projects pulled our attention away from it. Hopefully in the next day or so we can get it put back together. 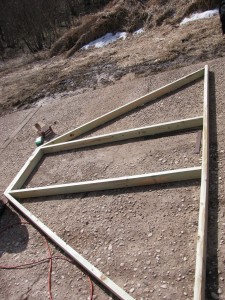 After we finished seeding stuff on Monday we realized that we had to get going on our hoophouse extension. With all of the stuff that is going to be started next week we weren’t going to have room. The hoops are made from 3/4inch plastic electrical conduit with cable running through it that is bolted to the floor frame. This gives the hoops strength and is much cheaper than buying a prefab kit from a greenhouse supply company. We got all of the framing done today and got the hoops up. We are going to try to get the poly sheeting up tonight so that it doesn’t blow away. 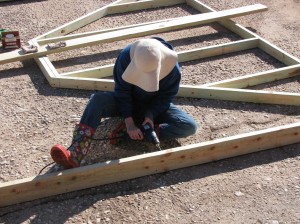 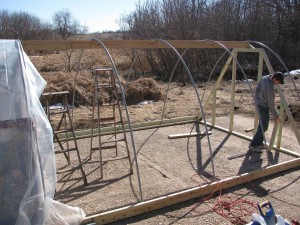 Hopefully by tomorrow we will have the extension done and the tables installed. My biggest concern is that with all of the crops we are started from seed in the greenhouse we still won’t have enough room to put everything! But like everything in farming, we will solve that problem if and when it arises.