Home/Information/This Week on the Farm 4/29

As usual the month of April has flown by. This year we were lucky enough to have Shelbi back working with us full time since the first of the month. It has helped take a load off of our shoulders having her back on the farm!

So far April has been a very dry month for us on the farm. Since we are coming off of a dry winter we are a little concerned about the amount of moisture in the soil, but we are in a good place as far as our irrigation system goes, so that helps ease our worry. (Plus, we are farmers, so we are always going to worry about the weather!) Speaking of our irrigation system we got the mainlines hooked up and in place yesterday. This is the second year that we have had a full system in place that covers all of our fields and laying everything out and hooking it up went much more quickly this year. It helped that when we disconnected the manifolds last year we labeled everything by field number so we weren’t left wondering what length of hose went where. Now all we have to do is lay out the individual field manifolds and run the drip tapes as we plant each field. 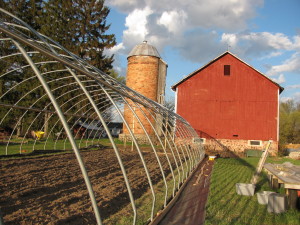 If you have been wondering what giant project we decided to tackle this year then take note. We are in the process of putting up a 30′ by 96′ high tunnel. We purchased the high tunnel from our friends at Lapacek’s Orchard. They were no longer using the high tunnel and knew that we would be interested, so they let us have first dibs. Early this month we went over to the orchard and disassembled the structure. It took a full crew an entire day to take the structure down and get it back over to the farm. We have been working on and off on the structure for the last two weeks. We have one more end wall to construct and a quarter length of the structure to put the hip board on before we are able to put the plastic on. I am hoping we will have time to work on it this weekend and be able to get the plastic on by early next week. We aren’t trying to grow any super early crops in the tunnel this year, but we are planning on growing some early cucumbers, carrots, and lettuce for the early season boxes. Once the lettuce is harvested we will plant some late season tomatoes in the greenhouse. That way they will be protected from the fall frosts and we may be able to have tomatoes through October.

Don finished constructing the new bee boxes and my dad and I finished making the frames about two weeks ago. We are adding a few more hives this year and we wanted to make sure that they would be ready for the arrival of the new bees. Most years the bees are shipped in mid-April, but we still haven’t heard anything on when this year’s bees will be coming. I did place the hives so they are ready to go and to give myself an opportunity to try out my new bee suit. After I was done placing the new hives I opened up our other hive to check on Queen Sophia. Her hive is buzzing with activity and I was very glad to be wearing the veil. Even with the bees buzzing at the netting near my face, I felt very comfortable in my bee suit and I am looking forward to the new hives. 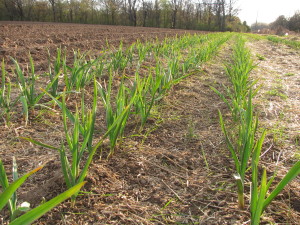 In other news, the garlic is up and growing like gangbusters. Shelbi raked off the last of the straw mulch and fertilized the garlic this week. We also picked up our seed potatoes last week and Shelbi and I planted those last Friday. We had to pull the potato planter with the four wheeler because our main tractor is currently out of commission, but it worked well enough. Hopefully the broken piece on our tractor will be fixed by next week and we can get it up and running again.

Last year our main tractor was having issues keeping the three point arms raised. If you can’t raise the arms up, the tractor is pretty much useless since it can’t lift implements like a planter or a cultivator. Tyler took the lift cover off and took the whole assembly apart. By taking it apart we found a couple of things that may have been the cause of our problem (a missing seal, some wear on a pin, and a worn o-ring), so we were feeling pretty confident that if we could fix/replace those parts we would be in good condition. However, when he went to replace a part that the instruction manual told him to tap into place, the part broke in two and a large section of it was inside the housing and we couldn’t get it out. Thankfully we were able to order a replacement part (something that can be tricky when your tractor was build in the 1950s!), but we weren’t able to get the one section out by ourselves so we had to take it to a local mechanic. We are waiting for him to get the part out so we can start again and we are keeping our fingers crossed that it won’t take much longer and that tractor will be up and running again. 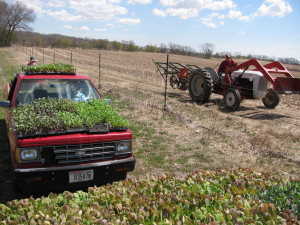 Thankfully we have Don’s tractor and have been able to use that to start working the fields and to run the transplanter. We are also getting a new to us tractor from a friend of ours who no longer needs it. It is a 1951 Model H tractor with a narrow front. They also have a disc and cultivator that they want us to take, so we will be in good shape once we get it home. The only catch was that it the front tire was off the rim and one of the back tires needed a new tube. We were able to get a new front tire since the old one was very worn and a new tube for the back tire yesterday and Tyler and Don are over putting them on tonight. Hopefully they will get it up and running tonight and we will be able to drive it home tomorrow. Don was really excited to get another old school tractor.

CSA shares are selling at a brisk pace so if you haven’t gotten your paperwork in yet, or know of someone who wants to sign up, now is the time! 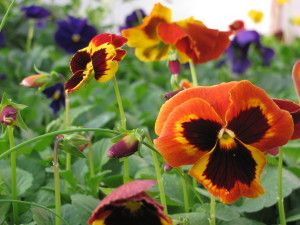 Also, we are having a bedding plant and hanging basket sale the first three weekends in May. We open this Friday, May 1st and our hours will be 9am to 6pm Friday, Saturday, and Sunday. We have pansys, petunias, salvia, impatiens, coleus, cosmos, snapdragons, lobelia, moss roses, morning glories, and much more for sale. Stop by and pick up something nice for Mother’s Day!