Home/Information/This Week on the Farm 6/4

Well it has been over a month since I last had a chance to update our blog. We have been so busy with all of the spring tasks on the farm that I haven’t had the energy at night to write about all the stuff we have been doing. I am looking forward to the first delivery of CSA boxes on June 16th and 18th because it forces me to take time to write about all the things we have done.

Things are looking really great this spring. We still have some shares available, so if you know of anyone interested they only have a week and a half left to get their share in the mail.

The weather has been super cooperative this spring, something that never happens. It has been dry enough that we have been able to get all of the field work done. This year we purchased bulk composted chicken manure and did a field spread of 1000 lbs per acre. The early brassica crops (kale, Brussels sprouts, broccoli, etc.) look so much healthier than in previous years. It only takes about 30 minutes to hook on the cone spreader and take two loads of the composted manure out to spread it on an acre. We are still going to side dress certain long season crops, but that task can be pushed off a little bit. 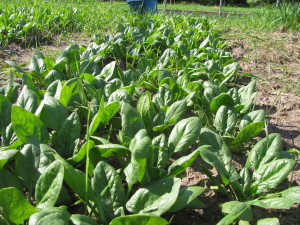 We tried transplanting spinach and looseleaf lettuce this year instead of direct seeding them. In past years the spinach had extremely poor germination in our sandy soils. By seeding them in the plug trays we had around 90% germination. After transplanting them out, we only lost a couple of plants, so they are the best looking beds of spinach we have ever had. The loose leaf lettuce generally germinated well (except last spring when we couldn’t get water on them fast enough!), but the weeds took over the bed so quickly. We had made the decision last fall that we weren’t going to grow the loose leaf lettuce because it was so expensive for us to grow since it took so many man hours to weed. But we changed our minds earlier this spring when we went to a FRESH Food Connection grower workshop. One of our fellow farmers gave us the idea of transplanting the looseleaf lettuce. You seed 4 to 8 lettuce seeds per cell in a 200 cell plug tray. The lettuce quickly forms a plug and you then transplant them out in a one foot wide block with plants every two inches. The lettuce is far enough along that it shades out most weeds. We loved the idea and wanted to try it this year. So far the block of lettuce looks great and we should have looseleaf lettuce for the first CSA box. 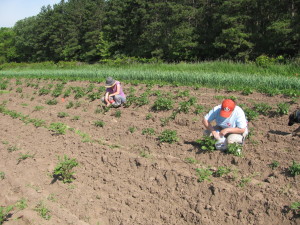 It is that time of year again were we have to start scouting for Colorado Potato Beetles. Most other farms use an OMRI listed product called Entrust to control CPB populations. Tyler and I agreed early on that we were not going to spray any chemicals, even those approved for use in organic systems. Instead we go through the potato field plant by plant and remove the adults and egg masses by hand. If you are able to catch them early enough you can have good control over the beetles. Our crew spent several hours Wednesday morning going through the field and we will spend another couple of hours tomorrow going through the field again. In total we will probably go through the field four to five times. We would rather spend our money on labor than on chemicals. 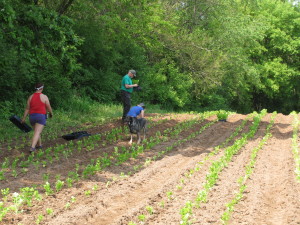 So far this spring we have transplanted celery, parsley, basil, lettuce, spinach, onions, scallions, leeks, eggplant, peppers, kale, collards, broccoli, cauliflower, Brussels sprouts, kohlrabi, cabbage, and a few other things. We have direct seeded peas, potatoes, rutabaga, turnips, radishes, carrots, beets, arugula, beans, and I know I am forgetting a couple things. Today is going to be spent transplanting tomatoes and tomatillos. If we have time we will start on the cucumbers and summer squashes.

I hope you are all looking forward to the first CSA delivery! Tyler and I are very excited to get the delivery season rolling!